The DCEU and the Millerization of Superman

“Superman is dead. Superman remains dead.
And we have killed him.”
—Kyle Kallgren

There’s a reason that Wonder Woman is the best film out of the whole of the DCEU. Wonder Woman wasn’t afraid to admit that their main character was a god.

The heroes of the DC Comics company have always been more god-like than their Marvel counterparts. From the Teen Titans, to the New Gods, to the Amazons, gods and god-like imagery have permeated the universe. Even Batman, the lone Übermensch of DC’s trinity, is still a keystone to the entire DC universe, which is pretty god-like, in my opinion.

To understand Superman, you have to understand his origins– all of them. Jerry Siegel and Joe Shuster created the character in 1938 to be published in the first issue of Action Comics. While the initial origin differs slightly from what we are familiar with today, Siegel and Shuster established much of what we know about the character very quickly. Sent from the dying planet Krypton, Kal-L crash landed on Earth and was found by Ma and Pa Kent of Smallville, Iowa, where Kal was named ‘Clark Kent’ and they raised him on their farm and with their values. While some of the details would change over the years, the basic idea is still there.

Growing up in Smallville (which would eventually be relocated to Kansas) is integral to creating Clark Kent. Grant Morrison, writer of All Star Superman, said that “Clark was the soul, the transcendent element in the Superman equation” in his book Supergods. Various comics have explored what Superman would be without Clark Kent, one of the more interesting ones being Red Son, which examined what Superman would have been like if his pod had landed in Soviet Russia. It’s a Mark Millar comic, though, so much like any of his others it’s far more interesting in concept than it is in execution. It was also one of the comics that Henry Cavill read to prepare himself to play the Man of Steel.

However, while there is always a flux in what American values are (just look at the history of Captain America), Superman’s values seem to be pretty static. If I were to describe them, I would put it as a combination of the Golden Rule and Spiderman’s “With great power comes great responsibility”. Superman does what he does not just because there is an inherent goodness in acts of heroism, but because he has the ability and therefore the duty to act. The fancy term for that is a “categorical imperative.” This categorical imperative is why characters like Booster Gold are interesting– a man from the future using technology he sees every day and his knowledge of the past to become a hero for fame and fortune– and characters like Superman a bit more difficult to write. 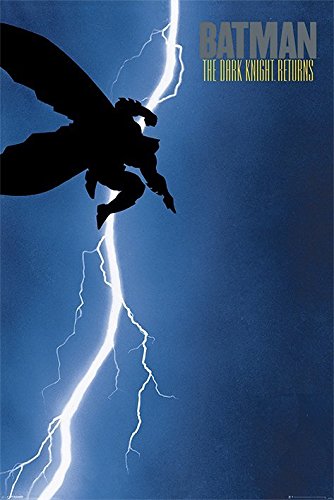 When I talk about the Millerization of Superman, I’m not talking about Frank Miller’s portrayal of Superman in his comics. Miller always seemed to have a disdain for Superman, much in the same way that Lex Luthor does. He’s not of this earth, he’s too perfect. Batman is interesting, more flawed, more conflicted. Superman shows up in Gotham and “There’s just the sun, the sky and him, like he’s the only reason it’s there.” And even in Superman’s own words, this quiet antagonism plays out as Superman thinks “We must not remind them that giants walk the earth.”

That’s not the Superman I want to talk about.

No, I’m talking about the characterization of Superman that has Frank Miller’s Batman grafted onto it.

Frank Miller’s The Dark Knight Returns is more or less a deconstruction of the ideas, tropes, and concepts that make Batman, Batman. Miller intentionally juxtaposes Batman with Superman — which is actually not that unexpected, as they are great foils. But the crux of Batman’s war, as they repeatedly call it in the book, is not focused on helping civilians as much as it is punishing the criminals. Alfred recounts a time when he read Bruce “The Purloined Letter” and Bruce “asked — no, DEMANDED — “the killer was CAUGHT. And PUNISHED.”” This speaks to how radically different Superman and Batman’s motives are. To graft those motives onto Superman, whose heroism at its very core is one based on service, even in The Dark Knight Returns, would have baffling results at best.

“A world made of cardboard.”

For comparison, let’s look at the Superman that people my age grew up with. The “World of Cardboard” monologue is one of the best moments of the Justice League TV show. Superman in the show is a serious hero, but they never forget that he is just as human as he is alien. His sense of duty, the fact that he can’t be everywhere at once, is part of the reason why he agrees to be a part of the League. This was the version of Superman that most people my age would have been familiar with. Which was also why it is hard for me to accept the Zack Snyder interpretation of the character.

Snyder… seems less concerned about that. One of the major complaints about Man of Steel was that there was no indication of any kind of damage control being done. Unlike in The Avengers, where we saw rescue teams evacuating civilians and Captain America giving orders to police to help people out, Zod and Superman crash through buildings seemingly without regard as to how many people might be in them. This is somewhat addressed in Batman v Superman (why Superman doesn’t get top billing in his own sequel is baffling in its own right), where the final climactic battle between Batman and Superman takes place in the literal “abandoned warehouse district” that Power Ranger Megazord battles take place. It’s definitely addressed in Justice League, where Superman and the Flash evacuate the anonymous Russian town that you’ve already forgotten the name of while the others go and fight Steppenwolf (yes, that’s his actual name). Part of this was obviously a response to the criticism of Man of Steel, and part of this was probably due to Joss Whedon taking over Justice League halfway through.

“They only lack the light to show the way.”

“People hate what they don’t understand. Be their hero, Clark. Be their angel, be their monument, be anything they need you to be. Or be none of it. You don’t owe this world a thing. You never did.”
—Martha Kent, Batman v Superman: Dawn of Justice

Let’s talk about my least favorite quote from Batman v Superman, shall we?

Superman does owe the world. At least, from a well-written perspective, he should feel like he owes the world. I earlier referenced Spider-man’s “with great power comes great responsibility”, but if we expand that into what was said in Captain America: Civil War we get “When you can do the things that I can, but you don’t, and then the bad things happen– they happen because of you.” Superman’s sense of heroic responsibility doesn’t come from the death of a parent, like Batman and Spider-man. There are plenty of versions of the Superman story where Pa Kent is still alive and doing just fine throughout the entire story. But the very concept of Superman was that he fights for Truth and Justice and, later, the American Way– the idea being that these are universal concepts and ideas to fight for in and of themselves. Given that there are entire branches of philosophy dedicated to tearing apart truth, justice, and government, that’s a pretty bold claim.

Snyder doesn’t seem to get that. Even with all of the god-like imagery that he tries to put into his films, he also puts in just as much despair and mindless violence, if not more. The world as he presents it doesn’t seem like it would be worth saving and, yeah, maybe Superman doesn’t owe that world anything. This is actually lifted from a different groundbreaking comic released in the 1980’s that Zack Snyder has adapted.

“The accumulated filth of all their sex and murder will foam up about their waists and all the whores and politicians will look up and shout “Save us!”… and I’ll look down and whisper “No.””
—Rorschach, Watchmen

But Rorschach isn’t Superman. Rorschach is coming from a very different place and a very different genre of comic book. Snyder seems to want to put Superman into the world of Watchmen without understanding why the two won’t mix. Sure, the ‘S’ stands for hope, but what’s the use of hope if the people who you swore to protect reject you? That isn’t deconstruction, it’s defeatism.

“You’ll believe a man can fly.” I started this post with the Kallgren quote from his Superman video because 1) it’s a great quote that encapsulates the entire thesis of his video and 2) I think it might be a bit premature to call time of death on Superman just yet.

Obviously I don’t agree with Snyder’s interpretation. There are probably a lot of interpretations of Superman that I don’t agree with. But the basic concept of Superman has lasted this long and has become this much of an icon that even pronouncing him dead isn’t going to stop him. Everyone wants to think that they would fight for truth and justice, and everyone, at some point, needs the hope that there are people out there that want to help. Superman is just as much about what he inspires others to do as he is about what he does. We look up not because he’s some imposing figure subjecting us to his morality, but because we want to believe that there are people like him out there, or that perhaps we might one day become like him. Because we want to believe that a man can fly.