So I recently got a Nintendo Switch, and with it the flagship release game The Legend of Zelda: Breath of the Wild. I’ve been playing it a lot lately, but I haven’t really been doing much of the main quest. Or even too many of the side quests, for that matter. Mostly what I’ve been doing is plain exploring– unlocking shrines, activating towers, expanding the map. Breath of the Wild has one of the most free open worlds of the franchise since the original, and one of the largest maps of any game in any franchise. The map doesn’t feel empty, though, which can be a problem with an open world like that. Part of that is due to the sheer amount of stuff in the world, beyond the waypoints and major locations. All of this “extra” stuff that only seems to exist just to exist is a part of a necessary element of fiction and particularly speculative fiction called worldbuilding.

Worldbuilding exists in all kinds of fiction, not just speculative (Sci-Fi and Fantasy) fiction. Because all fiction is made up, the writer has to create a world where this fiction would make sense. Some of the greatest worldbuilders include Jane Austen and Charles Dickens– not because they were creating worlds whole-cloth, but because they captured the worlds that already existed and that they lived in like a time capsule. Some fiction even has that as its goal. Victor Hugo’s Notre-Dame du Paris, better known in the Anglophone world as The Hunchback of Notre Dame, was originally written to advocate for the restoration and preservation of the Notre Dame cathedral after decades of disuse and abuse. But there’s also the classic cases like J.R.R. Tolkien, the master worldbuilder, who at times seemed to write his Legendarium less to tell the stories of Middle Earth and more to justify all of the work he put in to building the languages of Middle Earth. There’s a reason that all modern Fantasy owes a debt to Tolkien– he practically prefabricated several generations worth of settings already.

But different types of fiction require different types and levels of worldbuilding. Some are more extensive than others, but when done very well, they all require the same level of commitment and effort.

The World As We Know It

I’m not sure there’s a more Chicago movie to ever Chicago more than The Blues Brothers Chicagos. The Blues Brothers deals with a mostly-realistic version of reality (though it could certainly qualify as ‘Magical Realism’, if you want to shove it into an academic box), but the way it worldbuilds is both through the use of the culture of the city (Jake and Elwood comment about local landmarks as they’re racing down the road at 120 mph) as well as adding all of the elements together that lead to the giant car chase. Every element of the story, from the mission from God, to trigger-happy Carrie Fischer, to the Illinois Nazis, are all presented as matter-of-factly as Elwood’s crappy but realistic apartment. But still, the world of The Blues Brothers is never framed as anything but a version of our own world.

Most period pieces (the intentional ones, at least) often have to do quite a bit of worldbuilding in order to frame the period that they’re representing. Films like Miss Pettigrew Lives for a Day (which I talked about here) and shows like Downton Abbey are in particular focused on the clothes and culture of the era, which is common across the genre. And even the unintentional period pieces end up that way because the world building is so steeped in the culture of the era. Think about how much 10 Things I Hate About You feels like the 90’s, or how Pride and Prejudice is so steeped in the sexual politics of the Regency era. The rules and mechanics of how these worlds work then have to be changed for a different time period– 10 Things I Hate About You is adapted from Shakespeare’s The Taming of the Shrew and changes almost everyone’s characterization to make it less bad, and Bridget Jones Diary is a modern Pride and Prejudice with a mostly different plot.

A lot of stories, especially recently, put their world as somewhere between our world and a constructed world. The sub-genre of Urban Fantasy is particularly notable for this– stuff like Buffy the Vampire Slayer, Percy Jackson and the Olympians, even certain elements of Harry Potter fall into this. What they typically have in common is that there’s a barrier between the “normal” world and the supernatural occurrences: the Mist in Percy Jackson and the Statute of Secrecy in Harry Potter. The worldbuilding in these works often focus on how the supernatural elements interact with the normal world, how they’re kept separate, what happens when they interact with each other. Even in something as relatively “grounded” as Spy fiction (which, depending on the Bond/Mission: Impossible film, is not always very grounded at all) there’s an implicit understanding that there are normal people in these universes that buy groceries, get parking tickets, and have nothing to do with whatever insane stunt Tom Cruise wants to do this time. 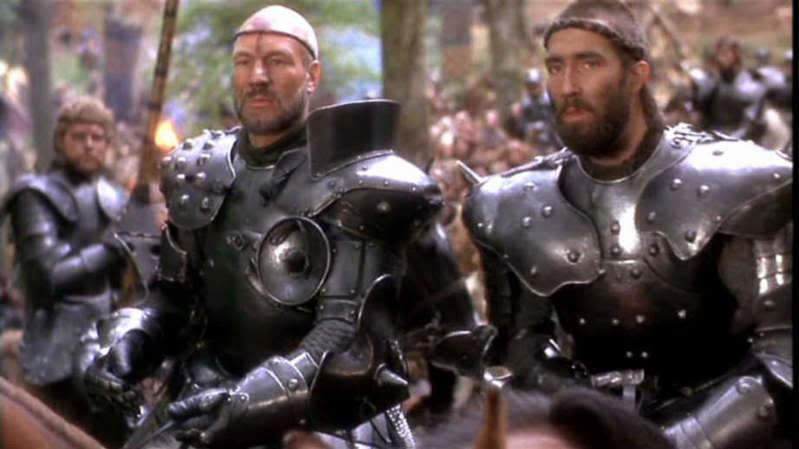 There’s also fantasy and science fiction that take place in our history– more Fantasy than Science Fiction, but there’s at least Steampunk. Still, these are stories explicitly set on Earth but including fantastic elements. Arthurian Legend (represented here by Sir Patrick Stewart as King Leodegrace) is typically set in a Medieval period, but of course almost always includes several elements of magic. Arthur himself was probably a real figure, and Merlin might have been as well, but the classic elements of the Green Knight, the Grail Quest, and a sword pulled from a stone are probably less real. The Magic Tree House, also an Arthurian fiction, works with this as well, using the titular tree house as a TARDIS to visit famous historical people and interesting places including Edo Japan, Elizabethan London, and the freaking Moon. On the Sci-Fi side, Stranger Things is great about not only introducing and establishing the supernatural elements of the story, but also are highly acclaimed for how they adhere to the 1980’s setting.

A Worldbuilder is You

Of course, there’s Fantasy and Sci-Fi that builds their own worlds, and of course we should talk about the master worldbuilder himself, J.R.R. Tolkien. Middle Earth is at the end of its Third Age by the time Frodo inherits the ring and enters the fourth age with Galadreiel’s departure from Middle Earth, and Tolkien wrote a lot about Middle Earth– enough that his son was able to compile a 13-volume history of Middle Earth, where one book was just the index of the other 12. In fact, the Third and Fourth age are a part of a larger time period called the Years of the Sun, which was preceded by several other time periods: the Ages of Creation, the Years of the Lamps, the Ages of Darkness, and the Years of the Trees. And all of this is incredible, if not for the fact that it’s a lot for a Fantasy writer to live up to. Is it any wonder that the next two major works of Fantasy (on the same level as LotR) were set in space and some castle in the Scottish highlands?

Science Fiction has the opposite problem, and that is that much of it has to deal with our history, and then the blank spaces between when the story is being written to when the series is taking place. Not all of it, of course– there is some that takes place in systems and planets that have nothing to do with out Pale Blue Dot. But there is a large chunk of Science Fiction that is set on Earth, or features Earth natives, and is explicitly in our future. Anyone remember that devastating world war that happened during the Nineties lead by genetically engineered super soldiers that caused most of our major cities to be destroyed save San Francisco and Paris? No? Or hey, how about the fact that Zefram Cochrane is going to make First Contact in our lifetime? (Less than 50 years away!) Obviously Roddenberry had very high hopes for our technological advancements. But on the other hand, we did get floppy disks, automatic doors, iPads, cell phones, Bluetooth headsets, and Skype– all of which have counterparts in the original series of Star Trek. And with advances in VR technology, we’re getting closer to the holodeck, which is really cool. And besides all of the Earth stuff, there’s also the aliens that the humans have to interact with, which often use Tolkien-esque worldbuilding in the sense that there are Vulcans that are tall and emotionless and wise, and Klingons that like fighting and honor, as well as Q that are not at all subtle, but quick to anger.

Worldbuilding is essential for any fiction, of course. You don’t have to be Tolkien– the best worldbuilding isn’t always a 13-volume history book, but a good location scout or the correct Greyhound bus. Your worldbuilding has to fit the needs of your story and at its best will be absolutely unnoticeable, even in High Fantasy or the softest Sci-Fi. It’s a “this is the way the world works” and the audience responding with “well, yeah”. Of course the Enterprise can move faster than light, of course Eleven has telekinesis, of course there’s a summer camp for demigods. That’s the how the world works.

What are your favorite fictional worlds? Let me know in the comments! Also, like if you can, and follow/subscribe so you never miss a post.