valeriemclean1919 Broadway, Disney, Newsies About Film, About Other Art 0 Comments

When it comes to Broadway adaptation of movie musicals, the best by far is Julie Taymor’s reinterpretation of The Lion King. Disney in fact owns a large corner of the Movie-to-Broadway market. Many of their biggest hits have been adapted, from Beauty and the Beast, to The Little Mermaid, Aladdin, Marry Poppins, and High School Musical— plus, Frozen just finished previews in Denver and set to open in February.  It makes sense that they would adapt these properties because many of Disney’s decisions are based on how many truckloads of money it will earn them. That’s also why they’re remaking their most popular animated films into live-action movies.

So why adapt a bomb?

Newsies (1992) only made back 2.8 of the $15 million that was its budget, and currently sits at 39% on Rotten Tomatoes. It was nominated for five Razzies, including Worst Picture, and brought home Worst Original Song for “High Times, Hard Times”. The film stands as one of the worst failures in Disney history, along with the likes of The Black Cauldron and The Country Bears. Meanwhile, Newsies (2012), ran for two years in its original Broadway run, has had multiple national and international tours, has a filmed version currently available on Netflix after a limited theatrical release, and was nominated for eight Tonys, winning for Best Choreography and Best Original Score. It’s by no means the runaway success of Wicked or Phantom or Les Mis, but it is very successful as far as Broadway shows go. See, Newsies (1992) got popular and remained popular thanks to (what else?) Home Video, unlike some of Disney’s other bomb. It’s one of Disney’s true cult classics, and has even made the jump from VHS to DVD and Blu-Ray.

But there is a major difference between most of Disney’s shows and Newsies, and that’s just how much they revised the story in adaptation. Is it better? Is it worse?

I mean, yeah, it’s better. Obviously. They had 20 years to fix everything that they didn’t work out in the original production. That’s how adaptation and remakes should work. And you certainly don’t win Tonys with songs that won Razzies. The changes that they made help make the story and characters overall stronger– but it’s also very different, which can be a bit disappointing to fans of the original movie. However, I can’t help but agree with most of the decisions that they made.

The first change most people will notice is a major change in tone. The movie was almost completely a straight drama. While the musical has tense moments and is serious when it has to be, there is a lot more comedy and light-hearted scenes, mostly through character interactions and dialogue. New characters like Katherine Plumber and Mr. Jacobi, as well as the reworked Medda Larkin and Joseph Pulitzer, fit the rest of the show much more than their counterparts in the film. In terms of tone, at least. And new numbers “That’s Rich”, “Watch What Happens”, and “The Bottom Line” are incredibly fun. Overall, it helps that it’s on stage rather than in a movie, because the whole thing is much more fitting as a stage show than as a film– mostly due to the fact that it’s a heavily choreographed show. Think about the opening of West Side Story, and how it looks just a bit ridiculous for these street gangs to be dancing at each other rather than actually fighting.

There are only two major characters that aren’t in the stage show, and those are Sarah Jacobs and Denton. Everyone else is back, and their roles are mostly the same, with some adjustments. David, the deuteragonist of the film, has his role noticeably diminished in the show, partly due to changes in theme and partly to give more time to other characters like Crutchie, who is much closer to Jack in the show than he was in the film. Medda Larkin, the vaudeville performer played by Ann-Margaret in the film, is greatly improved from the movie– her two songs from the film are replaced with “That’s Rich”, which is a great break before the plot-line of the strike begins. Pulitzer was rewritten from whatever the hell Robert Duvall was doing (I can’t find a clip, but it’s ridiculous) to a more standard stage/Disney villain, but one that seems more like what the villain of this story should be. 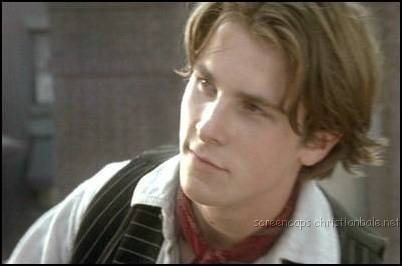 This isn’t a Christian Bale v Jeremy Jordan argument, the character as a whole is drastically changed from screen to stage. And as a whole, his character in the movie might work better than in the show, but we’ll get to that when we talk about theme. In the film, “Jack Kelly” is an assumed name, his character development is closely tied to the Refuge, and he’s called “Cowboy” because of his cowboy hat and desire to move to Santa Fe. In the show, they drop the assumed name and his name is Jack Kelly, but they also drop the nickname “Cowboy” in favor of a subplot where he’s an artist for some reason..? It’s mostly there for a payoff where a drawing that he did of the Refuge is taken to Teddy Roosevelt in order to shut the Refuge down and get Roosevelt on the side of the strike. His “I Want” song “Santa Fe” is also turned into both the prologue as an establishing moment, as well as the Act One closer, which makes sense like making “Let It Go” the Act One closer for Frozen— it’s the big iconic number for the show and an emotional high point. 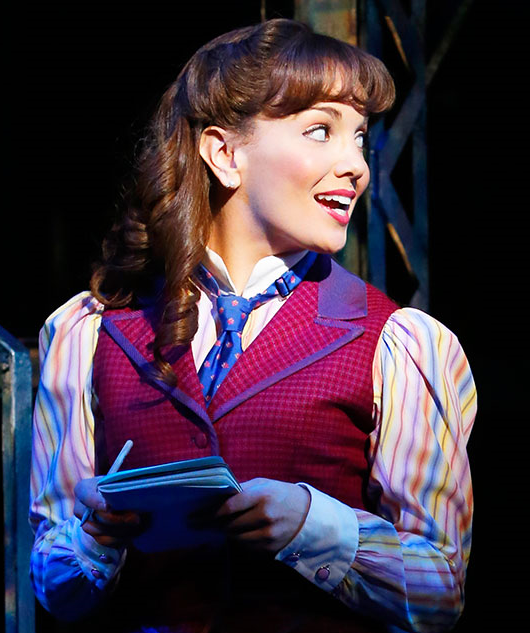 In the movie, Sarah Jacobs was David and Les’ sister, and Jack’s main love interest, and Denton was a reporter for the New York Sun that was covering the strike. These characters are omitted and combined into the show’s newcomer, Katherine Plumber. She’s also a reporter for the Sun, and not entirely historically inaccurate– though the actual person she was based on died in 1884 of pnemonia, fifteen years before the events of the musical. And while there were women working in journalism in the US all the way back to the John Quincy Adams administration, they were in fact mostly relegated to entertainment and other “ladies news” subjects as opposed to strikes and riots. Katherine acts as Jack’s love interest as well, and has much better chemistry with him than Sarah did, though their duet at the end, “Something To Believe In”, isn’t exactly “A Whole New World” or “I See the Light”. It’s a nice song, but Menken has done better.

The theme of the film is not about the strike. In the show, it sort of is, but in the film it’s definitely not about the strike– it’s about Jack and his relationship to the concept of “family”. In the film’s version of “Santa Fe”, it starts and ends with Jack contemplating the Jacobs as a family, and even says to himself “Ain’t you glad you ain’t that way?”. His desire to go to Santa Fe is both to escape the Refuge as well as escape what he views as a place where he has no family to a place where it doesn’t matter that he’s an orphan. Much of the action in the film is around a statue of Horace Greeley with his famous “Go west young man” saying inscribed on the pedestal. The show tries to pay lip-service to this through Jack’s relationship with Crutchie and a few lines here and there, but cutting out David and Les’ family severely diminishes that theme.

Meanwhile, the strike is more to the center of the theme of the show. The show is much more about generational conflict and how, as Roosevelt puts it at the end “Each generation must, at the height of it’s power, step aside and invite the young to share the day.” Katherine says something similar in her song “Watch What Happens” in the first act: “Give those kids and me the brand new century, and watch what happens!” (World War One. World War One is what happens.) And while this is a great theme, especially now, it is disconnected from Jack’s desire to go to Santa Fe and his character arc. That’s not a minor flaw. You can actually see the same problem in Disney’s Beauty and the Beast, where Belle’s desire for “adventure in the great wide somewhere” is not really connected to her actual arc of learning how to love the Beast. The reason that Beauty and the Beast is able to get away with it is because the Beast is a much stronger deuteragonist, and actually gets his own “I Want” song in the Broadway show (“If I Can’t Love Her”) that is much more related to their character arcs. Jack’s deuteragonist is diluted amongst Katherine, Davey, and Crutchie, none of whom get the same amount of development as the Beast.

If I sound overly-critical, it’s not because I dislike either the film or the show. On the contrary, I think I’ve watched the show on Netflix at least 30 times since it was put on there. Both versions are a huge amount of fun, and worth watching. And both have their good and bad parts. It’s also great to see Disney actually take some creative risk– adapting an objectively bad film in order to not only improve on it, but also strike a balance between what people liked about the original and making it a more successful product. I feel like they did something similar with their recent remake of Pete’s Dragon. And risks like this should be encouraged. How many great stories are out there, buried in bad execution, or made for the wrong medium? Newsies shows that just because something was initially disliked and unsuccessful, doesn’t mean that it has to stay that way, especially if the bones are there. It also shows that looking at something critically can help make it better. What else could we look at again and try to make it better? The Black Cauldron? The Haunted Mansion? Howard the Duck?

…Okay, maybe not everything is salvagable.

What’s your favorite version of Newsies? Do you prefer Katherine or Sarah (or Davey!)? Let me know in the comments! Also, like if you can, and don’t forget to subscribe so that you never miss a new post!

Things Get Even Stranger: Review of Stranger Things 2 What is Worldbuilding?