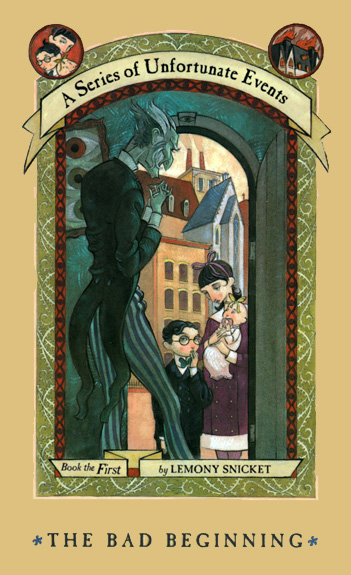 Mr. Snicket began his research on the case of the Baudelaire Orphans as a series of books disguised as children’s fiction for ages 9-14. The books seemed like ordinary books; they were made of paper and ink, some were hardcover, some were not, and used words originally written in the English language. However, unlike its contemporary counterparts, A Series of Unfortunate Events was a very gothic, a word which here means “using story elements reminiscent of early 19th century mystery writing”, tale. The Baudelaires are passed from guardian to guardian, with the villainous Count Olaf constantly at their heels. Meanwhile, secrets of their parents lives are slowly revealed as it becomes clear that they were part of an organization of dubious reputation. The books dealt with very odd and terrifying events, and one would have been much better off reading about boy wizards or Greek mythology, but for those who dared stake a claim on the Baudelaire story found themselves in a world unlike any other on a standard library shelf. Thirteen books were released in total, along with The Beatrice Letters, a supplemental book dealing with some Very Forlorn Dispatches between Mr. Snicket and Beatrice; Lemony Snicket: The Unauthorized Autobiography, which answered questions no one had asked, and asked questions no one dared answer; and a prequel series All the Wrong Questions.

The Netflix series is not the only time the sad tale of the Baudelaire Orphans has been put to screen. There was a movie produced by Nickelodeon that attempted to bring the film to the movie theater. Because the first company you would think of to bring to life the horrific and tragic story of fires and villainy is the one with a talking yellow sponge as its mascot. The movie’s fidelity, a word which here means “adherence”, to the events of the Baudelaire’s lives is mixed– while many of the events did occur, they did not occur in that order, and some did not happen at all. While the production was aesthetically appropriate and Count Olaf was menacing, the film was poorly received by those who wished for the tale of the Baudelaires to be accurately told. The Netflix adaptation seems to be the more coherent, a word which here means “actually following the timeline of events as portrayed in the books”, attempt. It follows the first four major events of the Baudelaire’s life after the tragic fire that destroyed everything– their stays with Count Olaf, Dr. Montgomery, Aunt Josephine, and their employment at the Lucky Smells Lumber Mill. As always, Mr. Snicket narrates, and his words are often identical to how he wrote them in the books. One should be so lucky as to expect that.

There are some major changes that were made– perhaps to be more accurate to the tale of the Baudelaire Orphans, perhaps because without supplemental material, there is very little world building in the first four books– and they are quite noticeable to those that know the story of the Baudelaires well.  In the first four episodes, there is a woman calling herself Jacquelyn, who might be F, S, or even R in disguise, but is probably a composite of K and J. Jacquelyn is there to fully tie the Baudelaires to VFD from the beginning, posing as Mr. Poe’s secretary. Larry, the waiter at the Anxious Clown in Lake Lachrymose, is given explicit ties to VFD as well; though, of course, he didn’t realize that this was a sad occasion. The show also brings back the spyglass that was used in the unfortunately made film, but adds a code-breaking feature to it, displayed in an incorrect use of Sebald Code during “The Reptile Room”. Though the code they use has a nice ring. B and B seem to be alive, which seems and even is a large change from the story. Their parents are very dead, so who are these volunteers? Who are the children that they are talking about? We are lead to believe that they are the Baudelaires, but nothing is ever as it seems.

Then the season ends with the Baudelaires now at school with the Quagmires sitting nearby. They ring in the end with a song that reminds the audience that the next season will not get better– and having read Mr. Snicket’s thorough research, I know for a fact that it gets worse. Secrets get more secret, dangers get more dangerous, those who start fires and those who put them out become the same people.

I cannot in good faith tell you to watch such a dark and depressing tale as that of the Baudelaires. If you wish to see three bright children solving mysteries, there are many other books for you to read, and movies to see. But if you are looking for truth and dark secrets and fires, then A Series of Unfortunate Events may just be what you are looking for. Proceed with caution, though– once you start down this road, there is no turning back.

“When we drive away in secret, you’ll be a volunteer;
So don’t scream when we take you:
The world is quiet here…”