How great is Stranger Things? I’ve never been so impressed by original Netflix content. Daredevil had a solid first season, Orange is the New Black is good, but Stranger Things is just absolutely captivating. The writing is rock solid, the acting is incredible (Winona Ryder needs an Emmy for this), and the design of the show is beyond what it has any right to be. And it is so many things– people have called it so many things– that it only just slips the might what it isn’t.

Stranger Things is not horror. At least, it’s not just horror.

Now, I’ve probably called it horror in conversation, and if you love horror, you will love this show, but it’s not simply horror. I considered doing a “Breaking Genre” piece on this like I did for Star Wars, but this isn’t such a difference that it would make sense. And in any case, it’s a very specific genre that most are not as familiar with as they are Sci-Fi and Fantasy. Stranger Things is American Gothic.

No, I don’t mean gothic as in “My name is Ebony Dark’ness Dementia Raven Way…” (I can’t believe I spelled that right on the first try), that’s little-g gothic. Or “goffik”, as it were. Gothic as a literary genre has its roots in Medievalism, but really came to the forefront during the Romantic period. While the genre has ties to horror, it doesn’t necessarily have to be horror. The British Romantics that wrote within the Gothic genre did tend more towards the horror side of the genre, producing works such as Frankenstein and The Vampyre. This tradition continued into the States with the works of Edgar Allen Poe. Gothic really found its home here in the US in the Spanish moss and rotting plantations of the Deep South, creating the sub-genre of Southern Gothic. This sub-genre has been used for everything from social criticism to straight horror, but it is only a sub-genre, and Stranger Things isn’t far enough south for it to qualify. However, that doesn’t mean we can’t use one of its best-selling works to explain in further detail the conventions of the genre.

To Kill a Mockingbird is one of those books that’s always on the short list for consideration as the Great American Novel. It is also perhaps the most identifiable piece of Southern Gothic there is (sorry, Ms Flannery), and it checks off many of the overarching Gothic tropes that Stranger Things also has. 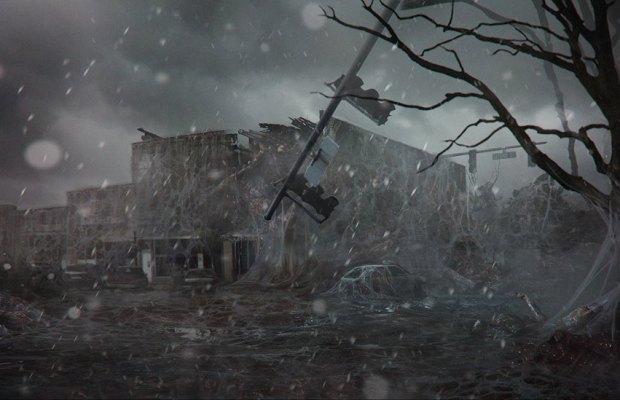 Concept art of the Upside Down

To Kill a Mockingbird is a great introduction into the American Gothic, but it lacks the supernatural elements that Stranger Things is built on. While Lee, Capote, and O’Connor use Gothic tropes to capture the cruel reality of southern living, up north Lovecraft and King deal with horrors beyond imagination. It’s easy to see Stephen King’s influence on Stranger Things— the title font is reminiscent of his books from the 80’s, there’s a kid with psychic powers, bullies that are weirdly okay with outright murder. You could probably play the Stephen King Drinking Game to this show. In fact, halfway through watching the show I was surprised that I didn’t see a credit to King in the title. Then, of course, there’s Lovecraft, whose influence on Stranger Things is sometimes direct (there are quite a few tentacles in the Upside Down) and sometimes through other works that he influenced (pervasive fog rolling through small town America? Got to be Silent Hill.) Stephen King loves the show, by the way.

There’s a post on Tumblr that says Stranger Things is built out of three genres: a Spielberg-ian coming-of-age for the middle school kids, a High School horror flick for Jonathan and Nancy, and a conspiracy thriller for Joyce and Hopper. These things aren’t necessarily different genres, they’re different plots within the same genre. Once again, genre is comprised of many parts, a combination of plot, characters, and setting. Stranger Things is more Fargo than Friday the 13th, more Hellboy than Halloween. The horror that Stranger Things presents is built far more on the unease of setting and situations than anything else, and it doesn’t let you adjust to the discomfort. American Gothic is built on this technique, and hopefully Stranger Things brings this kind of horror back to the mainstream.

Kubo and the Stories We Tell A (Revised) Future of Criticism