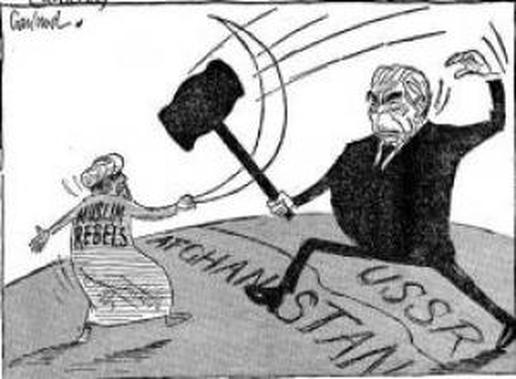 The Soviet invasion of Afghanistan was a small, but significant, part of the greater Cold War between the east and west. The Soviet Union invaded Afghanistan in December, 1979 with about 30,000 troops. The Soviet invasion was originally meant to be short term assistance in order support a puppet government but would drag on for 10 years. I chose this picture because it shows how a superpower invaded a tiny, backward nation for the sake of promoting Communism.

In 1978 Afghanistan was divided between the Communist government and anticommunist Islamic guerrillas. The Soviet Union at this time began to send in small groups of special forces troops to advise government troops. (The Soviet Invasion of Afghanistan and the U.S. Response, 1978-1980) In March, 1980 Brezhnev told a crowd of supporters “… the Central Committee can assure the Soviet people that we have everything necessary to repel any military provocation.” (Brezhnev, Current Digest of the Russian Press) Furthermore, Brezhnev prided his foreign policy on the victories of Vietnamese Communism over the U.S. and China proclaiming more victory in the future. (Brezhnev, Current Digest of the Russian Press) Brezhnev saw socialist societies as being free from “colonial oppression” and referred to the west several times as being “imperialists” because they were capitalist. I believe Brezhnev saw the Soviet Union as the leader of a revolution under the banner of socialism in the fight against capitalism. This ideology helped shape his foreign policy.

Afghan government forces proved to be unreliable and undisciplined leading the Soviets to deploy more troops to the country. They also began to take greater control of the fight against the Islamist opposition, the Mujahideen. The Soviets were a brutal force that killed innocent civilians they believed to be helping the Mujahideen. The brutal tactics by the Soviets only strengthened the resolve of the Afghan people and enforced international criticism against the USSR. The US began arming and training the Mujahideen to fight back against the Soviets. Although the Soviets eventually had 100,000 troops in the country they failed to maintain control of the countryside and mountains where the Mujahideen were free to operate. (Britannica) The Soviet failure to win a quick victory over rebel forces led to a stalemate which drained resources from an already stagnated economy. (Freeze, pg. 446) 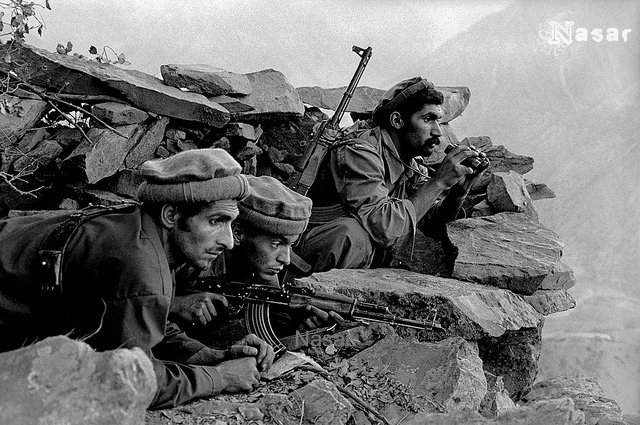 This Post earned a “hammer and keyboard” by the editorial team.

When the Germans invaded the Soviet Union in 1941 they were severely outnumbered but were better trained and equipped. Hitler and the German High Command predicted it would take four months to defeat the Red Army. The initial phase of the invasion was very successful. The Blitzkrieg worked as designed and drove deep into Soviet territory, encircling enemy troops and capturing many prisoners. By October 1941 the Germans made it to within sixty miles of Moscow. (Freeze, pg. 376)

In June 1941 the Red Army was far from prepared to take on a German invasion. Stalin purged many of his generals and junior officers. This made a Soviet response to the invasion poorly coordinated. At the same time the number of political commissars rose as did their authority in the ranks. What made the German invasion so successful and Soviet response so poor was, in part, the difference in morale and purpose. German soldiers believed in the fight against Bolshevism and the need to purge it while their Soviet counterparts’ loyalty was driven by fear. The German army was also much more technologically advanced. Freeze explains how of the Soviets’ 20,000 tanks, less than 2,000 were modern. (Freeze, pg. 376) Poor equipment, morale and leadership lead to the German army driving deep into Soviet territory in a short time.

Fast forward to February 1943 and everything has changed. The Germans were dealt a devastating blow at the Battle of Stalingrad and had began their long retreat west. By July 1943 the Germans were making their last major offensive in the on the Eastern front, Operation Citadel. (Freeze, pg. 381)  Kursk was the largest tank battle in history. The battle involved over 2 million troops and 6,000 tanks. In less than two months the Germans suffered 200,000 casualties and hundreds of tanks while the Soviets suffered over 850,000 casualties and thousands of tanks. (Britannica, Battle) The picture above shows Hitler weeping over the loss of men and equipment during the Battle of Kursk. After the battle Hitler told his generals “Whenever I think of this attack, my stomach turns over.” The Battle of Kursk was where superior German technology met Soviet production capabilities. Advanced German tanks were outnumbered and over powered by the T-34, which were much easier to produce. The Soviets also proved their manpower could be easily replaced where the Germans could not. The battle proved quality does not always win over quantity as it did in 1941-42. The Germans would never launch another major offensive in the east. Instead the Red Army would push the Germans all the way back to Berlin.

When WWII ended Soviet society still had many challenges ahead. Defeating the Germans was only one of these challenges. The Soviet Union needed to rebuild its cities, economy and relationship between the government and people. Now that the war was over the Soviet Union had to rebuild its supply lines of food throughout the country, which meant reviving farms destroyed by both the Germans and the Red Army between 1941 and 1944. The Soviet economy after the war was centered around the military. (Harrison, pg. 4) Post WWII Soviet Union became more militarized than it did before the war and Stalin became more powerful. His power and influence now extended into eastern Europe. The Soviet Union prepared for a possible war with the west. The end of WWII would mark the beginning of the Cold War, a largely ideological war with the west. 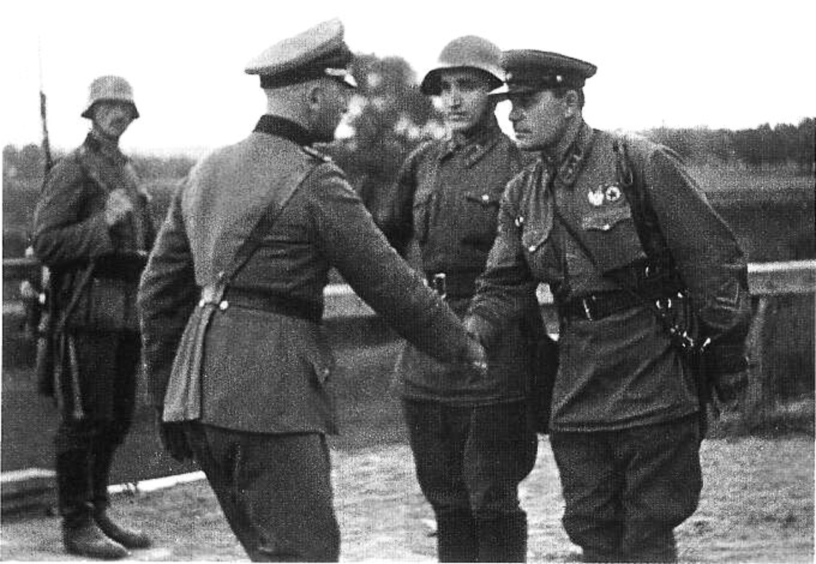