I have taken the first step towards my project and actually procured an advisor! Dr. Quigley, with whom I am also working for the Graduate Assistantship, will be advising me throughout my research process. I met with him briefly to talk about where I should start my secondary reading. He gave me some good books to look at since I have switched my topic to Confederate memory and monuments. At the moment, I am thinking of perhaps looking at monuments in contested areas like the counties of West Virginia and their neighbors in Virginia. I am interested in seeing how the war and Confederate soldiers were memorialized, when, and by who. Dr. Quigley gave me an article to look at (discussed below): “Written in Stone: Gender, Race, and the Heyward Shepherd Memorial” by Caroline E. Janney (2006). He also suggested books by Fitzhugh Brundage, David Blight, and Gaines Foster, some of which I have checked out of the library. Another book he suggested is Standing Soldiers, Kneeling Slaves by Kirk Savage. As for primary sources, in addition to the monuments themselves, I will look at newspapers and records from the local organizations involved with commemoration.

I have to admit that I was very skeptical of Scrivener at the beginning of the semester. But I watched the tutorial and it actually seems really useful and intuitive. And for only $35 for a student version, it’s pretty affordable…I may very well go ahead and get it!

I tried using Zotero last semester, but it baffled me. I think I’ll give it another try this time around since Endnote costs money. I’m sure that by following online tutorials and instructions I can manage Zotero. I wish it wasn’t just based in Firefox—I know you can get for Chrome, but that one was even more confusing than the real one when I tried it out before. We shall see what I end up deciding about all that.

As for interactive note taking, I wasn’t absolutely clear on what Single meant. When I read through Janney’s article I tried to be interactive by writing in the margins when I identified points of her argument, references to the historiography, and questions that I had from the reading. I guess that’s the basic idea! It did help me to read Single’s chapters since I was inspired to actually write down connections I made while reading instead of just underlining and hoping I’d remember later. Janney’s “Written in Stone” was very interesting. It was about the controversy over a monument placed by the United Daughters of the Confederacy in Harpers Ferry to commemorate the free black victim of John Brown’s raid, Heyward Shepherd. Janney raised some interesting points about the contested nature of Shepherd’s memory and the unique ways in which the UDC, NAACP, and others dealt with the proposed monument, its dedication, and its reinterpretation 60 years later. I think the scope of my project would require looking at more than one monument, but this angle is a good one to keep in mind. 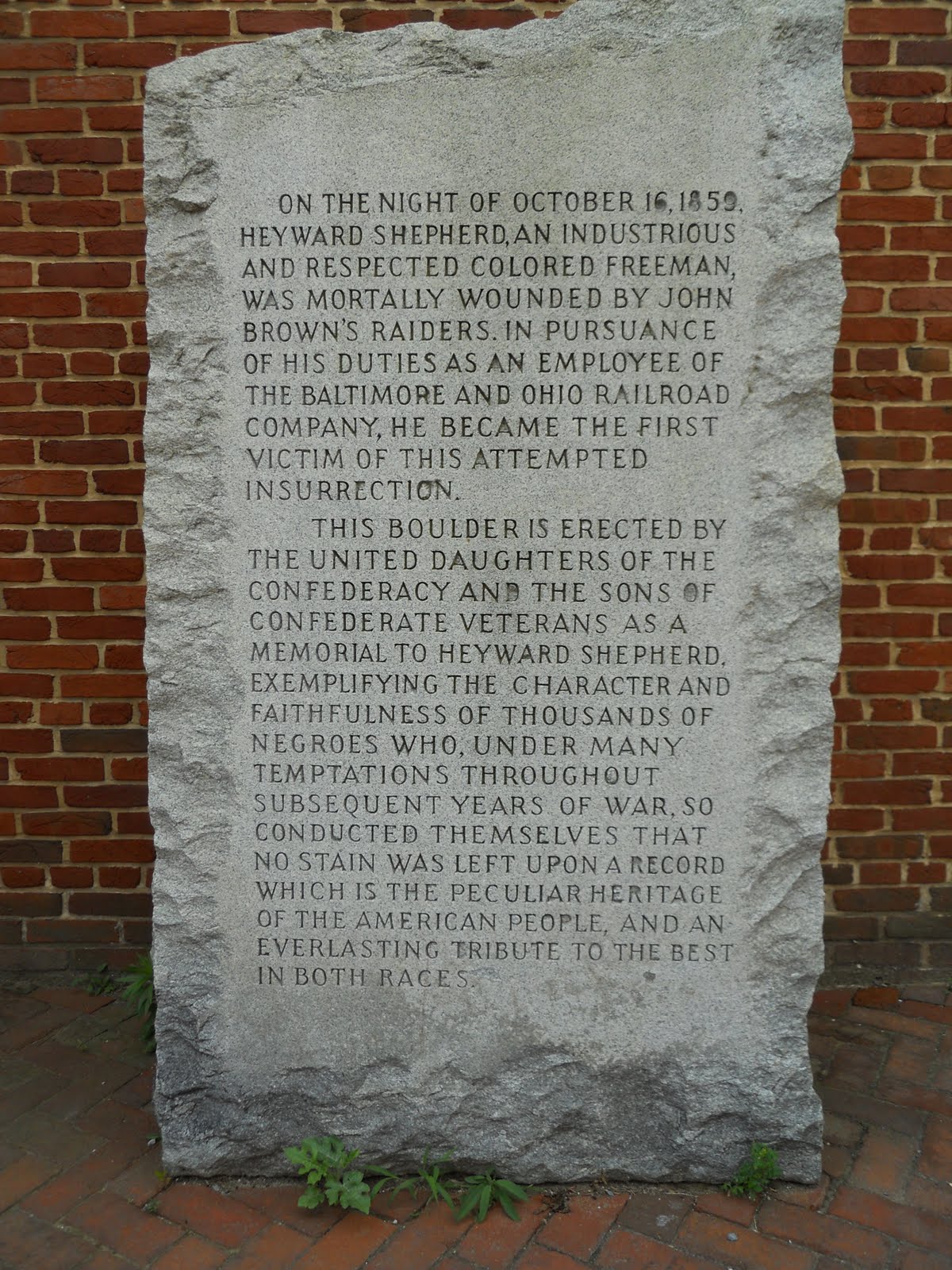 In addition to that, I looked at several books to get a start on my reading: Monuments to the Lost Cause: Women, Art, and the Landscapes of Southern Memory, edited by Cynthia Mills and Pamela H. Simpson (2003) (a collection of essays—I read the ones on Virginia for now, but other articles may be more useful); Confederate Monuments: Enduring Symbols of the South and the War Between the States, by Ralph W. Widener Jr. (1982) (mostly pictures of Confederate monuments arranged by state, with some general introductory material—possibly useful for finding good monuments to study in depth); and The Public Art of Civil War Commemoration: A Brief History with Documents, by Thomas J. Brown (2004) (a collection of primary documents with introductions—will be helpful as I narrow my topic I think!). So off to a start, and I’ve taken plenty more books out of the library in preparation for the weeks to come!