When you think popular music of the Soviet Union, the Beatles might not spring to mind. But in the relatively liberated time after the death of Stalin, and Khrushchev’s opening of some cultural borders, the young people of the Soviet Union soon found themselves in love with the Beatles, much like their western counterparts. Many elements of western youth culture filtered into soviet youth culture. Long hair, loud music, and drugs became the hallmark of a new counterculture movement.

Of course, much like their American brethren, Russian Beatlemaniacs and hippies were looked down upon by society for a time. “The Beatles led these young people into a filthy morass of moral dissipation,” reads one news article; “They are the so-called “hippies,” our half-baked imitators of the American and British good-for-nothings who call themselves by this name and think they are “independent,” says another. Despite this initial dislike and condemnation, the counterculture eventually becomes mainstream. “That damned music” becomes “Classic Rock,” and the world keeps turning. Eventually music schools open their curriculum to rock, and begin to encourage growth, and innovation, instead of imitation of western works. An article in a Russian newspaper lauds a folk band in 1973 that combined the instruments and lyrical style of the Beatles with Belorussian Folk Music. So when you dust off an old vinyl, remember an old babushka has the same record in her cottage.

You can take the Russian Peasant out of the wilderness, but you can’t take the wilderness out of the Peasant. The rush to turn a nation of rural farmers into a nation of urban peasants had been successful. More Russians than ever before lived in urban apartments provided by the government, closer to their factory jobs. But as life and the soviet economy normalized after the war and Stalin’s passing, what many wanted most was a taste of country life again. Enter the Dacha.

A row of Dachas in rural Russia.

As much as a summer home was a sign of prestige in the west, a Dacha was the sign of a favored member of the Soviet Union. Often nothing more than a simple one story cottage with a loft, the Dacha represented freedom from the city life many Russians endured in the USSR. While not every Russian owned a Dacha, the Kruschev government provided plots of land in the country for citizens to build their own Dachas, where an individual’s hard work could immediately be seen. Many Dachas had garden plots for fresh grown produce, and bathhouses, called “Banya”, perfect for steaming in before a dip in a cold lake. Banya is best experienced in the cold months

The freedom to build a home, and see the effects of hard work firsthand were valuable to many Russians that felt like cogs in a machine while in the city. On the weekends, tram lines to the country worked overtime to shuttle workers to their Dachas on Friday, and back to work on Monday. While it may not seem like much, a breath of fresh air, and a weekend out among nature was a critical part of early Soviet culture, and has persisted to this day. The author can attest to the relaxation a Dacha can provide, and anyone who has spent a weekend at a beach house eating barbecue can attest that sometimes the little things make life all the easier.

In the years following the end of the Second World War, the leadership of the Soviet Union found itself at the head of an increasingly disgruntled nation. A combination of factors led to simmering unrest in several Bloc countries. Firstly, soldiers returning from the war caused shifts in population, and needed care for a variety of injuries, both physical and psychological. Many expected a rise in social conditions for the USSR as a whole, however this was not to be the case. Living conditions were still generally poor across the Soviet Union, and the soldiers returning to the factories expected some compensation for their sacrifices. To begin managing the people, and to ensure loyalty of this group of middle management, Stalin afforded great privilege to certain members of society in exchange for absolute loyalty. Factory managers, labor leaders, and other members of the newly formed upper class had chauffeured cars, vacations, and the finest homes. Meanwhile their supposedly equal worker subordinates saw their own lives stay much the same. After Stalin died, the anger in many bloc countries at this growing inequality came to a head, and Khrushchev was forced to make a change to prevent revolt. In Russia and most Bloc countries, the lavish conditions were reduced somewhat for the ruling class, but not eliminated, in order to push some of the wealth downwards, and improve general standard of living. While there was general success in both improving worker morale and quality of life, the class divide Marx and Lenin had railed so hard against was forever a reality of the USSR.

Crowley and Reid “Pleasures in Socialism” 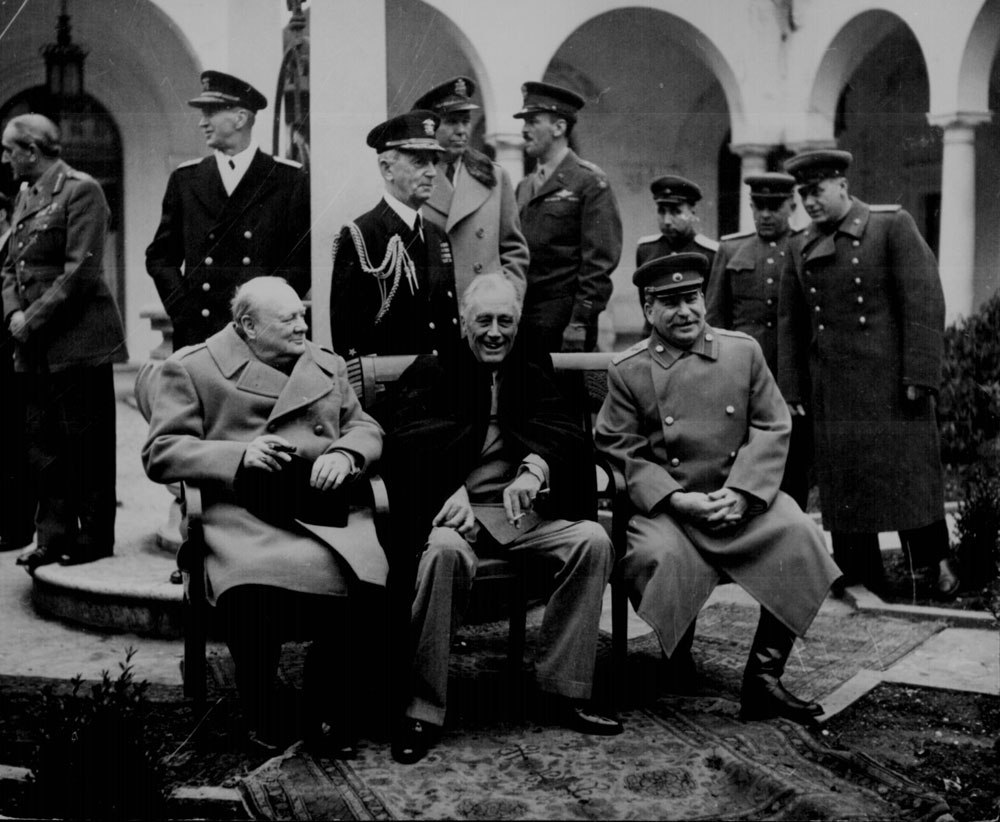 “The Enemy of my Enemy is my Friend.”

An ancient proverb that was first recorded before Rome stood upon the banks of the Tiber River. This became government policy for the three powers that found themselves in the unenviable position of fighting against the massive war machine of Nazi Germany. Stalin was just managing to hold onto Western Russia with his fingertips, and as the German Army doggedly advanced more every passing day, he needed allies if he expected to push back the tide. Britain, still reeling from its defeats on the European Continent, and the ongoing German bombardment, knew that if the Soviet Union fell, Hitler would turn his attention back to the last unconquered soil in Europe. The United States looked on, still unsure about joining another war in Europe, especially with victory uncertain. However, these three nations agreed that the best chance of beating their common enemy was to work together. US ships brought supplies into the same ports in Russia that had been used to support the Whites not long ago. While Stalin, Churchill, and Roosevelt may have had different agendas, and saw radically different post-war Europes, they first needed to deal with Hitler. The plan to do this got off to a rocky start. The US was wary of Russian intentions, and soon found itself in a war on two fronts after the Japanese attacked Pearl Harbor. The regular shipments of vehicles, medical supplies, and weaponry to the Russians diminished. While on the Soviet side, Stalin petitioned the US and Great Britain to begin an immediate ground campaign in Europe to distract the Germans. Instead, the two Western members of the alliance started a slow push through North Africa into Italy. Despite the arguments and complications of former adversaries fighting alongside one another, the West and the USSR began to grow closer as the war continued. Concessions were made on both sides, and in popular culture, films in Russian and English espoused the heroism of all forces fighting the Germans. When the war started to turn against Hitler, there were even hopes that the erstwhile foes would be able to end the war as not only Allies, but true friends. When Russian lines met the battle lines advancing from the west, soldiers embraced and shook hands. The Brotherhood of Combat concealed the underlying political differences that had seemed so extreme before the war. Unfortunately, this good cheer would not last, friends born of a mutual enemy soon fall back to their old ways when the enemy is vanquished, and at the end of the war in Europe, the old arguments began to flare up again. By 1946, the battle lines for the Cold War had been drawn. Waging a modern war requires many things, weapons, ammunition, vehicles, uniforms, supplies, and most of all, soldiers to fight. However, raising a standing military is expensive, and it takes away from the workforce that pays for all of the things needed for war. When the Soviet Union was on the march towards the Second World War in the 1930s, Josef Stalin, the leader of the USSR had the challenge of creating a military that could stand up to Germany and Japan, Russia’s largest rivals. However, Stalin had a few problems that his peers in other nations did not. First, he planned on keeping a tight control over all Soviet military forces. Military leaders are the biggest threats to dictators, as a popular officer with troops behind him can easily topple a hated tyrant. To prevent a coup, Stalin began systematic purges of his Officer Corps, killing off the majority of military leadership. This in turn complicates Stalin’s second major problem in forming a military in the USSR: the relative inexperience of recruits and the existing military forces. Tsarist Russia’s military had been killed or fled after the revolution, and with he remaining officers mostly put to death in the purges, there was a shortage of experience, and no one to train new talent. To combat this, Stalin implemented some policies that would increase general military readiness. In addition to creating propaganda films popularizing the military life, such as the film “Tractor Drivers,” released just before Germany and the USSR invaded Poland; Stalin set up programs to encourage fitness of the average citizen, training with weapons, and subtle familiarization with military equipment. Tractors being introduced to the collectivized farms shared controls and operation with tanks being quickly built in factories and prepared for war. If Stalin’s recruits from workers and the peasantry wouldn’t be well led, they would at least be well drilled. Propaganda ensured that Soviet citizens associated war and the military with patriotism. The aforementioned film, “Tractor Drivers” romanticized the military life, the ease of workers in battle, and espoused Soviet values by making the lead characters from across the Soviet Union.

Trotsky’s essay on the role of cinema in the revolution gives a unique look into the philosophical foundations for almost ubiquitous policies in the USSR. Firstly, the analysis by Trotsky of the 8 hour work day interested me, because I’d always though of the 9-5 work day being an institution of the western world, whereas Trotsky calls the revolution responsible. However, regardless of the origins of the 8 hour work day, the proposed system of 8 hours work, 8 hours sleep, and 8 hours relaxation became almost an institution in the early USSR. This resulted in a facet of Soviet Culture that is more well known, propaganda films. While the Soviet State aimed to develop the “Ideal Worker” in its citizens, even workers need to rest and relax. However, the two most common Russian diversions, drinking, and the church, did not fit within the Soviet plan. Trotsky’s vision of the future was a Russian populace not under the grip of either “undesirable pastime” because they were visiting the theater in a communal setting. This laid the foundations for a Soviet film industry. While at first some films were heavily philosophical, as soviet culture developed more and more, the line between propaganda and entertainment blurred. Maybe Trotsky intended “patriotic” films, or maybe he’d think the Russian people had traded the Church of God for the Church of State.

A small outcropping of civilization against the beautiful, but sometimes alien world. Isaac Levitan’s painting, “Over Eternal Peace” is stark and beautiful. Unlike other pieces of the “Wanderers,” there are no visible humans, instead only a lonely church on a hill, overlooking a beautiful, but desolate landscape. However, even without people, this piece still speaks to me, not only about the mindset of Russians at the end of the 19th century, but also to the human spirit as a whole. We live on a massive world, despite the fact that we can change our surroundings to suit us, it still dwarfs us, and cannot always be understood or overcome.

Welcome to the KGBlog, there is nothing to see here.