Before the start of the First World War under the reign of Tsar Nicholas II, Russia was a primarily agrarian society. Therefore, it was widely believed that throughout the war and thereafter the inhabitants of Russia would be well fed due to the abundance of grains bei the time Februng grown. However, the supply of food along with other essential items such as kerosene, footwear and textiles had dramatically dwindled quite rapidly.

The February Revolution is believed to have started due to protests regarding the food shortage, wartime privation and the government’s ineffectiveness. Lines such as these in which the common people waited to buy bread were common throughout many of Russia’s cities, especially affecting Petrograd.

After the Provisional Government overtook the government, they dealt with the food shortage by establishing a State Committee on Food Supply on March 9th and then soon after that they set a fixed price on grain. The Provisional Government believed that this would create a stable environment for currency, which was a large problem in countries such as Germany in which inflation caused the price of bread to rise dramatically as well. However, the fixed price did not help with the shortage and even caused more problems in Russia such as jammed river ports, railroads and roads. Clearly, this problem extended past an issue of hunger. It had far reaching negative implications.

Photographs of a bread line:  http://www.dhr.history.vt.edu/modules/eu/mod03_1917/evidence_detail_19.html

Russian Poland on Verge of Revolution

An article in The New York Times entitled “Russian Poland on Verge of Revolution” describes a country that has eclipsed the fine line between unrest and revolution. In Gregory Freeze’s text he explains how the insurrection went beyond the borders of Russia into the Ukraine, Bessarabia, the Baltics, Finland, Crimea, the Cacasus, Sibera, Central Asia and finally, Poland. The citizens of Poland were especially discontented after the uprising in 1863 due to their essential loss of rights and they played very important and active roles in the revolution of 1905.

The article describes the social climate of Poland in which the disturbance between the rioters and the united forces of the military and police escalated to a number of wounds and deaths due to the absence of the reservists who had been called out to serve on active military duty. The rioters went so far as to blow up railway bridges and disconnect telegraph wires.

Throughout these protests, the writer describes how soldiers and police attempt to escape from the protests. For example, the prefect of Police of Warsaw left Poland for St. Petersburg and the article also points out how soldiers took advantage of the confusion of the explosion of the train to escape. Although very little is written about this in the article, I feel it’s the most significant portion. It’s not often one sees members of a police or military force try to run away from a disturbance as serious as this. It’s certainly a sign that the government was ready to lie down and accept defeat to avoid future conflict. However, it also may be indicative of how the individual soldiers and/or police force were also proponents of the revolution. 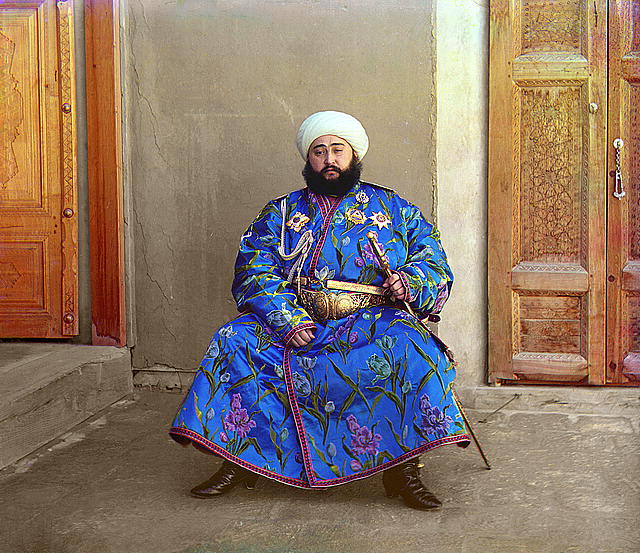 Welcome to my first blog post! My name is Jessica and I’m a history major and a senior here at Virginia Tech. Throughout my career at Virginia Tech I have admittedly never had much of an interest in Russian history. However, this past summer I started learning a lot about Central Asian History and I stumbled across some interesting texts about the relationship between Central Asians and Russians. It helped me realize the highly complex history of Russia and how the country was a larger member of the making of history than I had initially realized.

Because of my interest in both Central Asian history and my new-found interest in Russian history I chose this image of  the Emir of Bukhara, Alim Khan taken by Prokudin-Gorskii. Alim Khan was the last known emir of the Manghit dynasty before the abolition of the dynasty by the Bolsheviks as well as the last emir of Bukhara, which is now the country known as Uzbekistan. Alim Khan is such a wonderful example of the shift from a purely Muslim Central Asian nation to one ruled and greatly influenced by Russian and Soviet control.

Alim Khan, born on January 3, 1880 was the son of Sayed Abd al-Ahad who sent Alim to live and study in St. Petersburg as a cadet at the Nikolaievsky Military Academy. Because he spent much of his childhood in Russia, Alim ignored Bukhara for long stretches of time while he visited what he felt was his motherland. He was warmly received by the Romanovs who showered him with expensive gifts during his visit, however, his luck quickly changed as the Bolsheviks chose to hunt him down instead after his refusal to step down as the emir. Alim Khan fled Bukhara in September 1920 to Kabul, Afghanistan.

It is fascinating to me to know about a place like Bukhara which was heavily influenced by the religion of Islam came under the control of Alim Khan who associated himself with an Eastern-Orthodox nation which had completely different values and traditions as his homeland. His education in Russia is so indicative of Bukhara becoming less inclined towards Central Asian customs and Islamic traditions and more inclined towards Russian attitudes.