When I parked my CR-V on the side of Wall St. this afternoon at 4:55, I had no idea that by 6:55, I’d be sitting in Torgerson 3100 awaiting a lecture from Dr. Juliane Hammer, a specialist in Islamic studies and religion in the Americas from UNC Chapel Hill.  At the present moment, I sat, and reconsidered my parking choice. Although it was in a convenient location, I cringed while I took in the scene of broken branches that lay scattered all around the yard next to me. The oak I was parked under clearly lost them in the recent winter storm–and since I have a history for attracting broken branches to the top of my car, I didn’t want to add this date to my streak. As I reconsidered my parking location–because it was conveniently halfway between my evening appointments, I decided to stay because it wasn’t windy (and therefore lower threat from wind shear) and I wanted to be at the Blacksburg Museum & Cultural Foundation (aka the Alexander Black House) by 5:00 sharp.

Tonight was the Spring Social + Induction for the VTGrATE (Virginia Tech Academy for Graduate Teaching Assistant (GTA) Excellence) and I wanted to make sure I was there to be present for the social, and to show face for the Landscape Architecture Program. (We are small, so it’s important to me for us to make a splash when we can.)

The social was nice. I met some interesting new people, saw several familiar faces, and generally soaked up the opportunity to be in the Alexander Black House as it was my first time going into that place. It was getting close to 6 or so when I decided it was time to split. I would have loved to stay longer–the “social” felt more like a “fancy party” and I certainly didn’t want to leave behind the festive spirit and good company from the VTGrATE group, but in the back of my mind, I was being pulled away and on to class.

So I said bye to my friends and I left.

The Diversity for Global Society class starts with a discussion of what’s in the news and on our minds in general, so I was banking on coming in on the tail of that conversation. My timing was pretty good, as I was able to be present for the end of that discussion and the turning point in class where we were briefed on the important lecture that we would be going to at the top of the hour.  Hosted by the Virginia Tech Women’s Center, we would be attending a lecture by Dr. Hammer entitled “Saving Muslim Women.” When Dr. Mathias said this, I felt an internal jolt and my mind started racing:

Isn’t that a weird title for a lecture? Who needs saving? Am I supposed to save someone?  How will I possibly do that? What does that even mean? What kind of lecture are we going to, exactly?

Don’t get me wrong–I wanted to go, I just wasn’t sure what I was in for yet.

This blog post is about that lecture and the insight I gained from being present in that moment. Eventually, this post will go into some detail about what Dr. Hammer was sharing with us, but first, I wanted to provide a little background and a couple of short videos to help frame the problem.

Ok. So me sharing these videos was an effort to illustrate the range of issues that Muslim people experience and have to deal with.  I mean, seriously: no one has ever asked me (although I have heard of Catholic Christians being asked this question) “Oh, so are Christians cannibals? Do you really believe that you are eating the body and blood of Christ when you take the sacrament?” To me, that’s a ludicrous question. Of course we aren’t cannibals; it’s a symbolic tradition. The point is this: when people misconstrue ideas or hold on to stereotypes about groups of people or unfamiliar cultures because they don’t understand them and then take that misunderstanding, add fear, and then turn that into hate, we as a society have a serious problem.

History has taught us (or has it?) the grave importance of standing up to hate. I often think of this quote by Martin Niemöller when I am reflecting on what it means to stand up to the status quo: 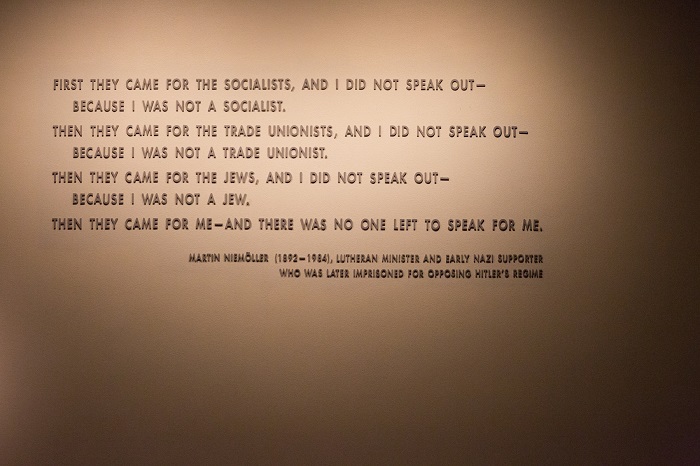 I was re-introduced to the Center for American Progress during the Hammer lecture. (“Re-Introduced” because it’s been a while since their name came across my radar and I was unfamiliar with their mission and values, specifically.) In case you aren’t familiar, here is an excerpt from their About page:

The Center for American Progress is an independent nonpartisan policy institute that is dedicated to improving the lives of all Americans, through bold, progressive ideas, as well as strong leadership and concerted action. Our aim is not just to change the conversation, but to change the country.

As progressives, we believe America should be a land of boundless opportunity, where people can climb the ladder of economic mobility. We believe we owe it to future generations to protect the planet and promote peace and shared global prosperity. And we believe an effective government can earn the trust of the American people, champion the common good over narrow self-interest, and harness the strength of our diversity.

Browsing their website, a headline with “Mississippi” in the title immediately caught my eye. Being from Mississippi, I was particularly curious and followed the link. Posted back in October 2017, it describes a reaction from faith leaders in the community to H.B.1523, a piece of legislation passed in 2016 that effectively gave power to business owners to refuse service to people based solely on their values, lifestyles, and cultures.  Embedded in the article was this wonderful video that captures the philosophy of these religious leaders from my home state:

I think that what they are saying here dovetails with the Hammer lecture from tonight.

Hammer opened her lecture with an invitation to have a conversation about her topic after the presentation. In her introduction, she also pointed out that she would not be using slides because that would run the risk of “further objectify[ing] Muslim women by the use of their image in a slide show.” She warned us it wouldn’t be a fun talk: not to listen to and not for her to give; yet, due to the political urgency of the topic, she knows that the topic needs to be discussed, because there are stereotypes, cultivated fears, and a wealth of misinformation swirling around social media, in politics, and in the press.

Hammer’s lecture was about deconstructing the term “Islamophobia” and she gave us a background on the origin of the term and how it became so widespread in the United States post 9/11. She explained that the term originally surfaced in the United Kingdom in the 1990’s, and it has always been problematic because “phobia” actually refers to a singular mental issue and “Islamophobia” is a broad term that really refers to a systemic movement that would be more appropriately called “Anti-Muslim Hostility.” In a nutshell, she offers a claim that the anti-Muslim discourse is perpetuated by (our) government(s) and (mainstream) media outlets because there is an agenda to create hysteria, confusion, and fear. The rationale behind this claim is that it makes for a good public distraction because as long as the debate is focused on

She built her case over the next hour, describing the prevailing anti-Muslim attitudes and beliefs, providing the audience a framework for understanding the main argument in her thesis: that hate and crime against minority groups is a moral issue; if you successfully dehumanize and create fear toward  a target group, then you can marginalize and leverage power over them.

Hammer describes Anti-Muslim discourse against Muslim women in 3 points. The overarching theme is that “the group of Muslim whom who can’t be saved is growing” and this idea is used to dehumanize Muslim women.

In the end, Hammer provided clear and open arguments against each of these 3 points she presented as the most harmful Anti-Muslim discourse circulating in media, forums, within hate groups, within the minds of the fearful and ignorant.

Hammer said it was about (radical) acceptance versus simply toleranating (that we need to do better than just tolerate others, but completely accept them for the human beings they are without condition.) She said it is about having allies and taking leaps of faith. That we all must become aware of the structural issues. Part of it has to do with control and power–what is accepted and tolerated by the dominant group.

This lecture “Saving Muslim Women” –“saving is about a discourse; Muslim women are the only ones who can save themselves; but it really comes down to this attitude/thought that women must be saved from Islam and from their Muslim men. [So, 1.] Saving Muslim women and [2.] dangerous Muslim women’s bodies. These are two different strategies in a discourse that draws lines between types of Muslim women that can’t be saved under any circumstances [thus becoming a threat and an object to be hated.]

She held Q&A for about 45 minutes after her lecture (which was extremely insightful) and I was grateful that I had spent my evening listening to her lecture about the discourse on Muslim women. I was vaguely aware of these ideas, but I had only heard about it through reporting on NPR or in the news. I understand how untruths and stereotypes have been spread historically to hurt, kill, and leverage power over minority groups. [A glaring example: think back to the WW2 reference above and the hate-campaign that the Nazis waged against the Jews and other minority groups in Europe during the Holocaust.]

My experience at the Hammer lecture changed me. I learned more about the adversity that some Muslim women experience in places where Islamophobia is on the underbelly of the dominant culture [namely the United States and the United Kingdom]. Listening to the case studies in her research were heart wrenching and opened my eyes to a lived experience that I had no concept of before. I can feel that I have greater empathy and understanding now.  It’s going to take me some time before I will know my strengths and where my place is in working towards increased diversity and inclusion, but I know that I am on the journey to figuring out how I can make a difference.