By the time the 1990’s came about the Soviet Union’s days were numbered, though no one fully understood it yet. The signs had been there for several years, but they had merely been taken as the state being more lenient or that there were simply major problems that had to be addressed, but not a complete failure. Things such as the secession of many satellites in the late 1980’s that the old USSR would have crushed, were allowed to pass. The main issues that were compounding the problem were the increased defense spending with the US, the failing economy, and the radical changes that Gorbachev was making to try and bring the Soviet Union in new direction full of life. 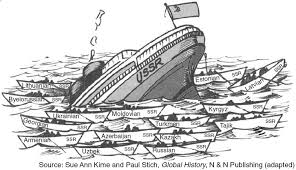 The issue that was cause for most concern in 1990 was the economy because without funds the government could not accomplish anything else. During the 1980’s Gorbachev had tried to reform the command economy into something that could work. The attempt failed because party leadership did not fully embrace the change and did not think it was the right way to do things. This left the economy in a very bad place with all the negatives of a command economy and some of the negatives of a free market and the Soviet economy stagnated somewhere in the middle.

To combat this the Soviet needed a kick start to get the heart of the country back going. This resulted in a team of sophisticated economists led by Stanislav Shatalin to come up with a drastic plan for a drastic time known as the 500 Days plan because this was supposed to be the amount of time it would take. The plan was embraced by Western banks who’s money was needed to keep the Soviet Union solvent. However, this embrace only came at the rejections of many command economy tenets such as privatizing state assets like farmland and cutting many subsidies for agriculture and industry. In the end Gorbachev chose not to go through with the plan because he feared it would be too radical and would create havoc as well as him personally losing some power. A watered down form was later used that did not have the desired effect. It was designed by Prime Minister Nikolai Ryzhkov who had no formal economic training.