For starters, many may not know that the modern pig belongs to the Suidae family, which also includes sixteen total species of hogs and pigs (Fox). Pigs (the modern domestic breed) specifically fall under the genus Sus Scrofa Domesticus, which Giuffra and his colleagues prove in a genetic study titled, “The Origin of the Domestic Pig: Independent Domestication and Subsequent Introgression.” With the tagline “domesticus” at the end of the modern barn pig’s genus, where did he originally get the rest of his name? Perhaps, the common farm pig simply represents a tame version of a “wild” pig. For example, many assume the modern dog merely resulted from a domestic wolf; a topic debated often in the Deep History and Domestication class this year. However, Ceiridwen Terrill, in her autobiography, Part Wild, refutes this common theory that “Fido” resulted from a gentle wolf. Rather, she states that while dogs and wolves share a common ancestor that “was neither a dog or a wolf” (Terril 18).

So what of Wilbur? The domestic pig actually originated from the wild boar, who belongs to the genus Sus Scrofa, not coincidentally (Giuffra). Besides an obvious resemblance between pigs and wild boar, how exactly have scientists come to the conclusion that pigs came from domesticating wild boar? Through mitochondrial DNA sequencing and nuclear gene sequencing, found in the studies like that of Giuffra’s, scientists have successfully ratified that the domestic pig did in fact originate from the wild boar, but also more specifically, that Wilbur came from the wild boar of Europe and Asia. Although they now have enough technology to prove a species’ origin, scientists have not always produced accurate results when trying to discover an ancestor.

It proves easy to discover a historical animal that looks like it could have produced a modern species and assume it did; but without genetic proof, one should not assume that just because one species resembles a former one, that a relationship exists. With the modern domestic pig, this mistaken ancestor happened to “roam around Europe and Asia” sixty million years ago, and it basically resembled a massive pig; a species known as an Entelodont. As previously mentioned, scientists assumed this “giant pig” produced the farm animal of today, yet they have not successfully proven any direct relationship at all (Hutchins 275). 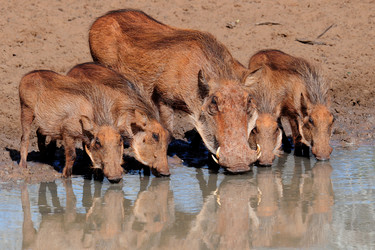 This photo, derived from the Tree of Life Web Project, clearly outlines both the resemblance between the modern pig, as well as the species of Suidae it originated from; the wild boar (Tree).

The Suidae family itself underwent its own evolutionary history before transforming into the modern family of pigs and boar. As a matter of fact, the Suidae family used to hold a different name entirely; the Suiformes. These Suiformes, pictured below in the image derived from http://palaeos.com/vertebrates/cetartiodactyla/artiodactyla.html, 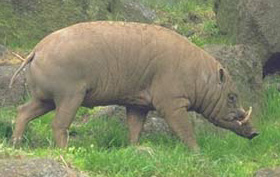 existed about forty-eight million years ago, and they exhibited “simple stomachs, bunodont teeth, and a less-advanced limb structure” as compared to the modern family (Hutchins 275). As the specific family of the modern pig evolved, so did its genus, Sus, as previously mentioned. With millions of years separating the origin of modern pig with the modern pig itself, numerous changes had the chance to occur. To keep things relatively simple, the evolution of genus Sus is represented in a basic timeline below:

Clearly. this particular genus first formed during Miocene epoch briefly discussed previously, then evolved into containing pig-like animals that fell under the genus Babirusa, and lastly morphed into a genus that contains the Warthog, which then became the modern domestic pig.  During the Pliocene and early Pleistocene epochs, this genus underwent severe shifts from containing 17 subspecies, to ultimately losing all diversity. Furthermore, some subspecies even appeared for a short time and then disappeared as quickly as they popped up in Africa However, these species actually served as effective time markers when researching the origin of the pig (Hutchins 275).

Furthermore, the wild boar that belong to this genus fall under the  four subgroups, divided by geographic location, outlined below:

After discussing a brief overview of the history behind the modern pig this project focuses on, one would then inevitably wonder how exactly the original Suiformes that became the Suidae, and the genus Sus that evolved to contain warthogs, eventually came to behold Wilbur. In other words, how exactly did the wild boar undergo domestication and produce the modern domestic pig?

One theory suggests that the pig was originally domesticated in today’s Turkey, and also names the pig as the oldest domesticated animal besides the dog. However, as with any topic in history and science, other theories do exist. For example, Carl O. Sauer proposed that the modern pig first became domesticated in Southeast Asia and soon after “diffused” to Northern China. How exactly did the newly domesticated wild boar make its way across the vast continent of Asia? A study titled Patterns of East Asia Domestication based its entire work of this simple question. Below is a diagram, produced by the participants of this research project, that outlines the various time periods and locations of the domestic pig within East Asia. In other words, it shows the distribution of domestic pigs as well as the wild ancestors. 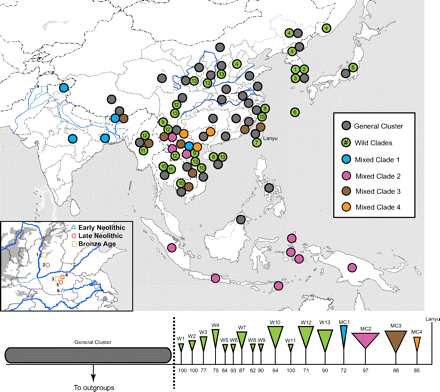 Clearly, a lot of overlap between the wild boar and the domestic pig occurred during the initial domestication and “diffusion” throughout China. The green dots represent 100%, wild, undomesticated boar. These specific “clades,” or groups of animals sharing a common ancestor, are simply identifying the various mixes within the overlapping groups. This shows just how complex the domestication and spread of the pig (Larson).

It makes sense that various theories seem plausible because characteristic of the pig’s ancestor, the wild boar, suggest that the pig actually underwent domestication more than once, and in more than one location (Gade).  With so many different possibilities of domestication, it proves arduous to outline just one pathway from the wild boar to the domestic pig. However, Brett Mizelle has compiled a useful list of specific known “milestones” in the history of the modern pig (Mizelle,182-183). This list includes both the domestic history, as well as a few cultural impacts of the prevalent pig throughout history.

9000 bc- wild boar domesticated in Eastern Turkey and China

5000 bc- pig breeding established in China

1492- 1550- pigs expand rapidly in “New World” during the Columbian Exchange- This section requires a bit of elaboration, for it describes a key event that although it happened rapidly, it did not occur in one night or even in one century