*This post was recognized in the Comrades’ Corner (week 9)

On February 10, 1962, American U-2 pilot Francis Gary Powers was released from the Soviets in exchange for Rudolf Abel (real name Vilyam Genrikhovich Fisher), a Soviet spy convicted of espionage. 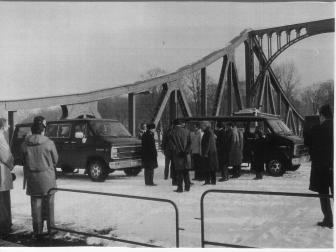 Rudolf Abel worked in Soviet intelligence during World War II. After the War, he began working for the KGB and was later sent to New York City, amongst several other Soviet spies, in order to obtain vital intelligence for the Soviet Union. The FBI received a tip from another Soviet spy, who had turned himself in, regarding Abel and his illegal actions. The FBI began surveilling Abel and his residence in New York. On June 21, 1957 Abel was arrested by FBI Agents for allegedly spying for the Soviet Union. He was later tried in Federal Court on three counts of conspiracy. An insurance lawyer from New York, James B. Donovan, who also served as a wartime counsel for the Office of Strategic Services (OSS) during World War II, accepted the case and successfully defended Abel in preventing him from receiving the death penalty. Donovan made the claim that Abel might be needed as leverage in future negotiations with the Soviets.

On May 1, 1960, pilot “Francis Gary Powers took off from Peshawar, Pakistan, at the controls of an ultra-sophisticated Lockheed U-2 high-altitude reconnaissance aircraft. Powers, a CIA-employed pilot, was to fly over some 2,000 miles of Soviet territory to Bodo military airfield in Norway, collecting intelligence information en route. Roughly halfway through his journey, he was shot down over Sverdlovsk in the Ural Mountains. Forced to bail out at 15,000 feet, he survived the parachute jump but was promptly arrested by Soviet authorities” (history.com). The US Government released a statement saying the plane was collecting weather data and veered off course after the pilot reported issues with his oxygen equipment. However, Powers was unaware with the statements the US was making, and admitted to Soviet authorities he was on a mission to collect intelligence. The Russians also collected the wreckage of the downed U-2 and found evidence to support Powers’s confession.

This event had numerous catastrophic consequences. Immediately following the U-2 crash, there was a Four Powers Summit on May 15, 1960 in Paris, it was attended by then president of the United States Dwight D. Eisenhower, Soviet premier Nikita Khrushchev, French president Charles de Gaulle, and prime minister of the United Kingdom, Harold Macmillan. Going into the meeting, many people were optimistic, as this could have been an event to ease tensions between the US and the Soviets. It even had the potential of shortening the length of the Cold War. However, “in the wake of the Soviet downing of an American U-2 spy plane on May 1, Russian leader Nikita Khrushchev lashed out at the United States and President Dwight D. Eisenhower at a Paris summit meeting between the two heads of state. Khrushchev’s outburst angered Eisenhower and doomed any chances for successful talks or negotiations at the summit . . . Tensions from the incident were still high when Eisenhower and Khrushchev arrived in Paris to begin a summit meeting on May 16. Khrushchev wasted no time in tearing into the United States, declaring that Eisenhower would not be welcome in Russia during his scheduled visit to the Soviet Union in June. He condemned the ‘inadmissible, provocative actions’ of the United States in sending the spy plane over the Soviet Union, and demanded that Eisenhower ban future flights and punish those responsible for this ‘deliberate violation of the Soviet Union.’ When Eisenhower agreed only to a ‘suspension’ of the spy plane flights, Khrushchev left the meeting in a huff. According to U.S. officials, the president was ‘furious’ at Khrushchev for his public dressing-down of the United States. The summit meeting officially adjourned the next day with no further meetings between Khrushchev and Eisenhower. Eisenhower’s planned trip to Moscow in June was scrapped . . . The collapse of the May 1960 summit meeting was a crushing blow to those in the Soviet Union and the United States who believed that a period of ‘peaceful coexistence’ between the two superpowers was on the horizon. During the previous few years, both Eisenhower and Khrushchev had publicly indicated their desire for an easing of Cold War tensions, but the spy plane incident put an end to such talk, at least for the time being” (history.com).

Upon the capture of Gary Powers, the US began negotiations with the Soviet Union to release Powers. As Donovan had argued, Abel would be used as leverage in the negotiations. Donovan became a key player in the negotiations, his role was displayed in the movie Bridge of Spies. “On Saturday, February 10, 1962, twenty-one months after his capture, pilot Francis Gary Powers was exchanged in a spy swap for Soviet KGB Colonel Vilyam Fisher (aka Rudolf Ivanovich Abel) at the now famous Glienicke Bridge. American student Frederic Pryor was also released at the same time at Checkpoint Charlie” (garypowers.org). Donovan became a key factor in future US negotiations.