This weekend Radiolab rebroadcast their episode on emergence.

Rising out of a surrounding medium, e.g. water.

That is in process of issuing forth.

Science. That emerges unpredictably as the result of an evolutionary process, spec. in emergent evolution.

Casually or unexpectedly arising; not specially provided for. arch.

Science. An effect produced by a combination of several causes, but not capable of being regarded as the sum of their individual effects. Opposed to resultant. N. Amer. An apartment house in which the units are owned individually, not by a company or co-operative; an apartment in such a building.

A term coined by Gen. J. C. Smuts (1870–1950) to designate the tendency in nature to produce wholes (i.e. bodies or organisms) from the ordered grouping of unit structures.

The world or universe as an ordered and harmonious system.

An ordered and harmonious system (of ideas, existences, etc.), e.g. that which constitutes the sum-total of ‘experience’.

Order, harmony: the opposite of chaos.

The whole is certainly greater than the sum of its parts.

Regarded individually ants have very little intelligence, if any at all, but together they are able to achieve incredible things without any central authority. 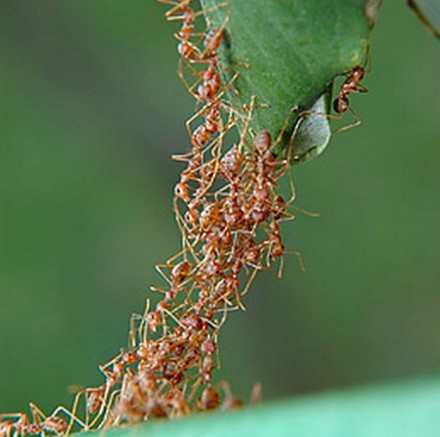 In the same way, our neurons are incredibly stupid when examined individually. Taken collectively they are able to produce complex thought through a complex layering of algorithms.

The internet is a meta-network which consists of nodes of human-augmented computing points. These nodes are grouped into websites (ideas/thoughts/condominiums/data space) which link to one-another. The Internet Map illustrates this quite well.

Is the internet already thinking? Is a neuron aware that it is part of a thought? Does it care? Should we care? Can we know?

I am an architecture undergrad @ Virginia Tech with an interest in emergent and interactive design.
View all posts by Adam →
This entry was posted in vtclis13 and tagged design, emergence, holism, science, universe, virginia tech, vtclis13. Bookmark the permalink.