This article reviews the works of a man named Sébastien Le Prestre, most commonly referred to as Vauban. Faulkner hits the main point of the man’s life, including all of his contributions to the French, and goes deep into the later implications of the fortress technologies that Vauban implemented in his works. The author displays a strong theme of trying to tie the medieval innovations to more recent events in history.

Vauban is best known for his fortification techniques, although he played a large role in siege planning and design. His fortresses almost always consisted of geometric patterns laid upon each other to create star-like structures. Other key design points include sloped walls and channels to direct the flows of attack. Vauban worked alongside many influential leaders of France including Louis XIV.  Louis XIV tasked Vauban to construct massive fortresses including citadels and a massive project called the iron fence. These two examples are only a few of a very extensive project history for Vauban.

The fortresses and tech that Vauban created did not die when he was put into the ground, but rather it evolved as the war landscape changed. Many structures today resemble that of Vauban’s ideology. Vauban built the structures not only to last but also to slow down the enemies. There are several examples in the article of how his fortresses fell but gave time for others to prepare for a fight. This correlates to a more recent example of how his tech was implemented. During the Second World War, Germany was slowed down enough by the Maginot Line to give those on the other side a fighting chance. Ideas for this fortification that ultimately saved the French people was derived from a single man who lived hundreds of years beforehand, aka Vauban.  This proves that technology never really dies, but rather it just spurs or influences the next idea. 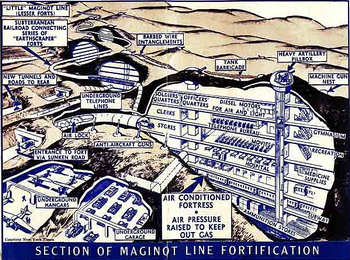 The second link is a very long, but very informative passage about the entire history and interactions between Louis XIV and Vauban. The source is very detailed and can be used if the reader is interested in a certain fort or to expand knowledge in his history as an engineer. This article brings forward the extensive history of Vauban. This article goes into much more detail of all of the design techniques as well as the reasons certain ones were used. The source is very useful to get a more enriched appreciation of the military genius of Vauban.

One Reply to “Father of the Fortress By: James Falkner”