Unlike some students in this course, or possibly like many, I’ve been taught many aspects of Russian and Soviet History.  However, these come only from the perspective on into the context of the Cold War and the Iron Curtain that existed for many decades.  I’ve learned too much about the political tensions in the international arena, the many different facets of the ideologies and what they meant, but very little about what actually went on behind the infamous “Iron Curtain.”  While this photo collection, collected on the Eve of the revolution and before the transformation of Russia into the industrialized world, and the Soviet Union, isn’t so much a peak behind the Iron Curtain, rather a comparison behind what things were to come to what things were prior to the rapid industrialization and transformation of landscapes.  The following picture I examine was taken by Prokudin-Gorskii who was the personal photographer to the Tsar of Imperial Russia. 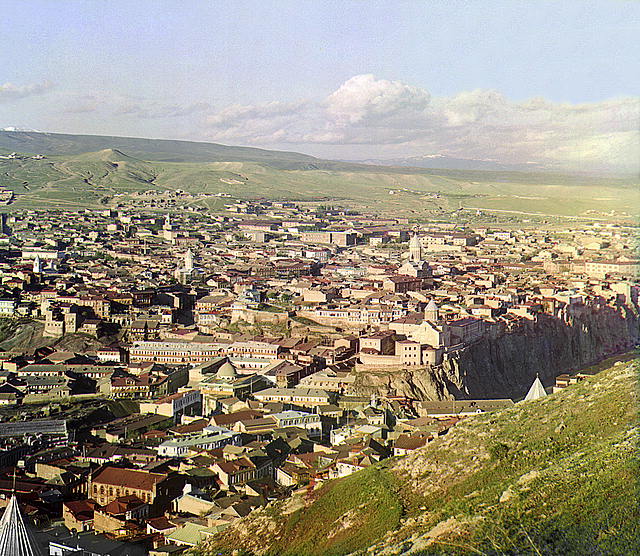 The transformations of landscapes really can be just more of a comparison to what a town, such as the first picture of the city of Tiflis, know known as Tbilisi looked during the final years of Imperial Russia.  Clearly ,even though this is a center of trade and commerce, like most cities are and have always been, it lacks the industrialized elements such as factories, clouds of smoke, power lines, telegraph wires, railroads, and visible massive construction projects that would be visible if you looked at pictures of say, New York City during this exact same time period. It is essential to examine the architecture and layout of these Imperial Russian cities because it foreshadows many of the changes that would begin to be engaged after the fall of this empire and the rise of another, much more different city for a much more different and needed modern time existing throughout the rest of the world that Russia would quickly see the need or had already begun to see the need for. This post though not extremely in depth, is meant for those to read to wonder how during a time when such technologies as the photograph were so greatly utilized, a city would still look as if it should have been a painting because of the lack or elements within the overall view of the city that show that industrialization and major world development was ongoing, proving that while these new technologies were accessible and being used, the development of those exact things within such a large empire was still far off it seemed, when it truth it was just upcoming.

Permanent record of the picture taken and used: http://www.loc.gov/pictures/item/prk2000001146/

Information on the overall history of Tiflis (Tbilisi): http://en.wikipedia.org/wiki/Tbilisi