World War II was a turbulent time in history for Soviet Russia.  Coming fresh out of the 1930s, the Soviet people were recovering from mass purges of the Communist Party, and it proved to affect Russia’s entrance into the war.  As Fuller notes in his chapter of Russia: A History, the military purges that began in […] 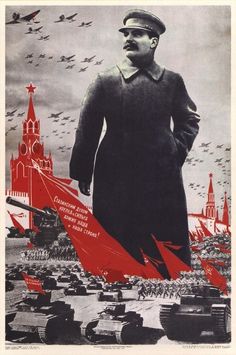 World War II was a turbulent time in history for Soviet Russia.  Coming fresh out of the 1930s, the Soviet people were recovering from mass purges of the Communist Party, and it proved to affect Russia’s entrance into the war.  As Fuller notes in his chapter of Russia: A History, the military purges that began in 1937 seriously affected the Soviet military’s hierarchy.  With “at least 35 percent of the officer corps” purged, the Red Army became seriously demoralized, not to mention the amount of technical knowledge the military would lose because of the arrests and executions (377).  These purges put Russia at a tremendous disadvantage when the time to fight the Nazis came around.  This, combined with Stalin’s inability to face reality, made for a sour start to a deadly war.  There were many military and political elites who assumed that the war wouldn’t even be fought on Soviet soil, which combined wonderfully with Stalin’s initial willingness to collude with Germany, in the hopes “that they would exhaust themselves in a lengthy war of attrition against the French and British” (379).  Stalin completely miscalculated how the war would play out, and it put every member of the Red Army and Soviet society at great risk.

Despite all of this, the Soviet people were willing to trust and follow the direction of Stalin and the Soviet state.  The problems from the thirties seemed to have “taught the mass of Soviet citizens a healthy respect for the power of the state” (385).  This allowed the state to centralize very quickly, and made the mobilization of people and resources during the war a lot more efficient, and aided Soviet Russia significantly in their victory.  So what of Stalin then?  He allowed himself to be manipulated by Hitler, was culpable for the insane amount of deaths at the start of the war, and was willing to scapegoat anyone he could in his bid to “divert blame from himself” (388).  Stalin was able to inspire fear in Soviet citizens.  The mere thought of a threat from Stalin motivated factory workers, as well as generals, to put in whatever effort was necessary to win the war.  Furthermore, as the war progressed, so did Stalin’s strategy in approaching the enemy.  His growing willingness to accept advice from his political and military aids contributed greatly to the turnaround Russia was able to make to secure victory over Germany.  However, the Soviet people loved him.  In a time of crisis and catastrophe, Stalin “became a symbol of national unity, an embodiment of the spirit of resistence” (388).  In July of 1941, in a very fireside chat-esque manner, Stalin addressed the Soviet people in a radio address in regards to the German invasion only weeks prior.  His greeting of “Brothers and Sisters . . . my friends!” gave the Soviet people a hopeful perception of their leader during a serious and fearful time.  He addressed the masses not just with disdain for the enemy, but with hope for the role they could play.  He urged the Soviet people to do their part, ordering them to make haste and mobilize in order to protect and defend the motherland, saying “the masses of our people will rise in the millions.”

At the end of the war, Stalin was sure to maintain his control over the issues that inevitably arose once victory was reached.  Among the many concerns, rebuilding the industrial base was a high priority, and Stalin hoped to achieve this with a fourth 5-Year Plan, and he did.  By 1950, “gross industrial output exceedeed tat of 1940 by 40 percent” (394).  He also implemented a political and ideological crack-down where he “reorganized the High Command, personally assumed the portfolio of Minister of Defence, and conducted a ‘purge of the victors'” in order to combat the lackadaisical rules that were allowed during the war (394). Stalin also deported well over a million indigenious people he felt were predisposed to collarborate with the Nazi party, and he also made it very clear in his electoral speech that “good relations with the Western allies would not continue in the post-war era,” to make sure that the Soviet people didn’t get too close to the idea of liberalization (395).  This went so far that it started “a xenophobic campaign to purify Soviet intellectual life of Western, bourgeois influence” known as Zhdanovshchina (396).

After the war ended, Stalin was adament on not letting the West entrench itself into the minds of the Soviet people.  They had just come out on the winning side of a bloody war (one where he caused a lot of blood to spill), and he was not about to let all of his hard work crumble under the stress of an alliance with the US and Britain, among others, and he knew Russia wasn’t capable of another war.  So when the Cold War arose as a problem, he bluffed.  He exaggerated the strength of his military, began a counterintelligence campaign that would inspire countless spy movies, and bought the state enough time to rebuild itself (399-400).  When Stalin died in 1953, the Soviet state mourned.  He laid in state at the Kremlin, and if you don’t believe that the Soviet people at least respected Stalin, don’t forget that 500 people were trampled to death on the day of his funeral. The man caused death when he was alive and after he died.  And despite the fact that millions of people died because of him in WWII, he also managed to win the war.  And in the eyes of the Soviet people, I guess that meant more than the damage he caused before the war, and at the beginning of it.

This post was featured in “Comrade’s Corner” on the Motherblog.