The definition of feuding from Websters Dictionary is a mutual enmity or quarrel that is often prolonged or inveterate. In Appalachia there have been many famous feuds. I would say the most famous feud has been between the two families the Hatfields and Mccoys.

But when I think about feuding in Appalachia I think about my mothers mom who grew up on a dairy farm on bent mountain in southwest VA. My grandmother, Gaynelle Simpson, was the youngest of eight and they lived in a three bed room farm house on about one hundred and sixty acres which is still in the family today. Down the road at the bottom of the mountain lived another family. I don’t even know there last name all I know is that Russel was the dad and or head of the family. The Simpsons and Russel’s family absolutely hated each other and no one really knew why. My mom has told me stories before of them getting into fights at the market and stuff like that, the feud was so intense physical altercations happened often. The feud between the two families runs deep and never really got resolved. I remember a time when I was about seven or eight years old. We were at a big family reunion and one of Russel’s relatives drove past in his car. I heard my great uncle Nelson say, “Well there goes one of those idiots.” 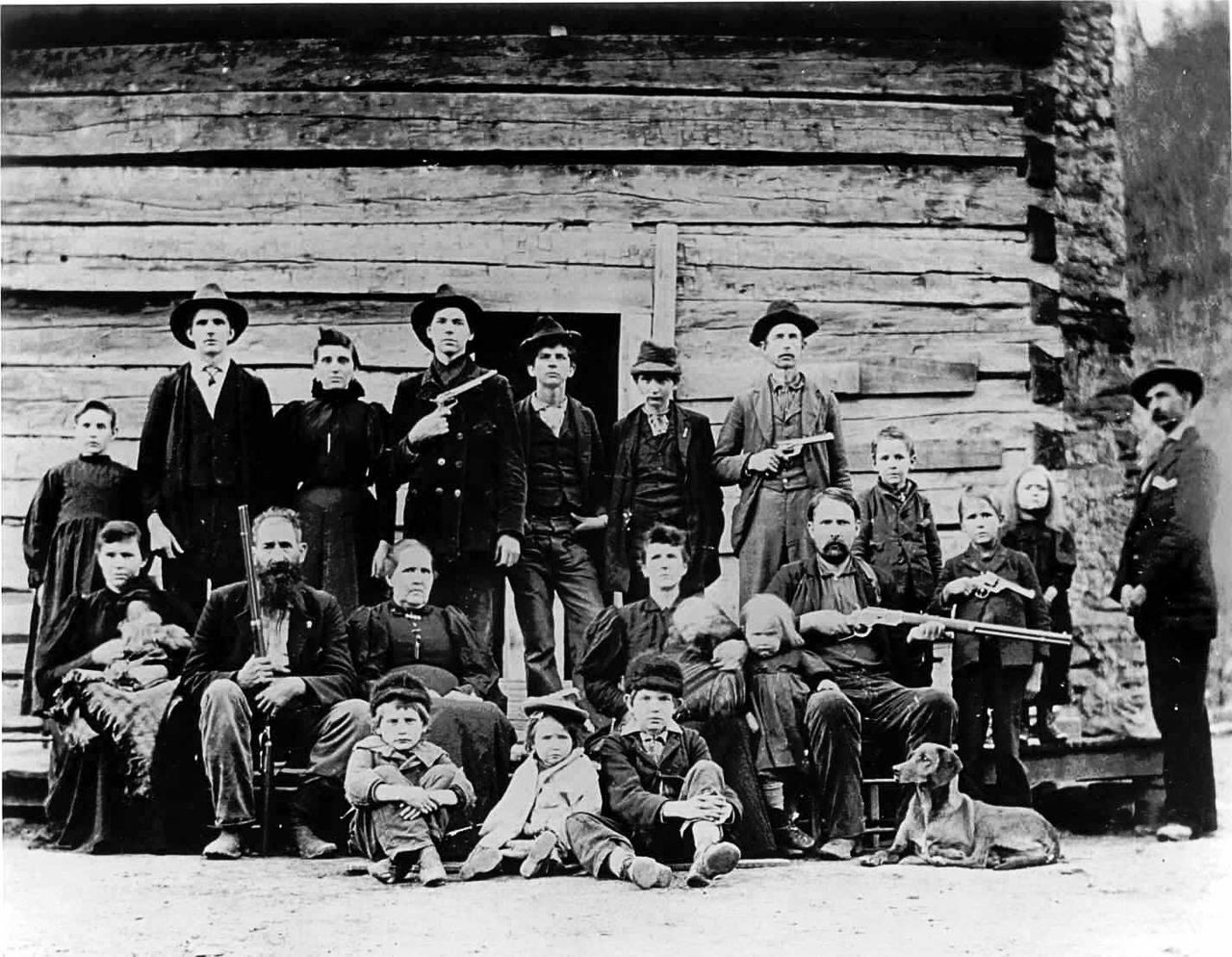 Above is a picture of the Hatfield’s armed and ready. Taken from https://en.wikipedia.org/wiki/Hatfield%E2%80%93McCoy_feud

After thinking about it for awhile I think that most feuds like this in Appalachia are probably caused by something minor. Then it would grow into something bigger because typically the men involved were never interested in working things out. In some ways I am sure feuds like this sort of helped the region. I say this because it brought families together, all those Simpson’s had at least one thing in common and that was they hated Russel’s family. They also had extremely hard lives back then, I mean they basically woke up and busted there backs in the sun all day. Feuds gave those people something to hate other then there daily lives.

To me long standing feuds like this seem sort of ridiculous, especially if no one can even remember the origin. But hey I guess that was just a way of life back then.

In reading Ghosts, Boundaries, and Names I was extremely intrigued that he said Wytheville, VA was, “one of the crossroads of American history.” I guess that sort of jumped off the page at me because it is fairly close to where I live. I have even bought a couple dogs from a man that lives there. So then as I read on I learned that you can basically get to anywhere in Appalachia using one of the routes out of Wytheville, VA. After hearing that I would now consider Wytheville a ghost of Appalachia just due to the fact that at some point so many people went right through that place. Now its just a place with an extremely small population, nothing ever even really gets said about that town anymore.

What was once a pivotal place in Appalachia is now kind of pointless. Wytheville is now just a ghost of Appalachia.

Hello my name is Jack Charles Wilkinson. I am currently in an Appalachian Studies course at Virginia Tech. I am happy to be in this course due to that fact that I am from Salem, Virginia. Salem is right in the heart of the Appalachian Mountains and I am very fond of the place I grew up. So learning about the area excites me a great deal. This blog is mainly going to consist of my thoughts on how the Appalachian region has kept some of it’s same traditions and customs and how over time things have changed. This is Mcafees Knob on the Appalachian Trail. The start of the hike up to it is about ten minutes from my house. This is just to give you an idea of where I live.

I read an article the other day called Cherokee Accommodation and Persistence in the Southern Appalachians, by John R. Finger. In this article one quote really stuck out to me and it goes as follows, “Their presence and cultural persistence made the southern Appalachians a truly triracial society.” What this quote eludes to is the fact that when white people and black people started to move into the Appalachian region the Cherokee’s adapted to some of the others customs and the whites and blacks sort of learned from the Cherokees despite over taking there land. So after all that took place the region basically consisted of three types of people. I think that’s why now a days there is still so much diversity in the Appalachian region if you look as it as a whole. Ever since the white people came over here the area has been culturally diverse and it remains that way today. I wonder if today the location of different races in Appalachia has anything to do with whether how Mountainous the area is or not??