David Lewis seeks to elucidate the importance of iron replacing wood as the dominant material for a whole sleuth of technologies early Americans used daily even though the practice was brought over from Europe. The world’s tools and machines were mainly made from wood before the implementation of iron which directly juxtaposes most societies that greatly transitioned over afterwards. This can be seen in today’s society where metals dominant the material scene alongside plastic which well not be discussed. However, there was a time were most of the technologies used be the general public were wood based, but the limitations placed on wood by friction would allow iron to replace wood in parts that required strength or long durations of friction. Iron, unlike wood, will only melt or burn at high temperatures and is extremely durable comparably.  Iron was also more versatile than other metals being accessible and customizable  to the job it was needed for.  These qualities allowed for iron to be used in many applications from drill bits to military weaponry. This transition improved efficiency and longevity of society’s tools which would lead to increased work production and general livelihood.

The ramifications of iron replacing wood did not end at better, more durable technologies. No, large-scale iron-making created a new societal construct that affected many early American communities. For example, blacksmiths could be found in any place where humans populated; however, in some instances the demand of iron was so prevalent that it caused legal action or formed trade relations. Places that did not produce enough iron, such as Virginia, had to control blacksmith’s rates and import iron from overseas. Also, new workplaces including such technologies as bloomeries, blast furnaces, and/or refineries were necessary to produce better and better irons. Bloomeries which produced the most basic and versatile form of iron, named “wrought iron”, were not producing enough iron. This lead to the creation of blast furnaces that could produce large amount of molten iron that could be poured into any mold, originally dubbed “pig iron”. Refineries made the production of steel possible which providing a very strong metal to anyone with the means to purchase it. These advances lead to Americas global influence on trade to improve which is shown by the fact that America produced one-seventh of the worlds iron by 1775.

Lewis does well to explain how irons implication in widely-used applications bettered not only the technology itself but also general society. He also goes into great detail about the technologies used for making iron, but for a some quick references check at the following links.

The first link is a YouTube video explaining blast furnaces. It focuses more on later successes and implications of blast furnaces which isn’t what Lewis is speaking about in this part of his book, but I feel it describes the process of making iron with blast furnaces well. It seems to be an old production which is interesting to watch due to its black and white color scheme and narrative style. The second link is a summary of how iron production evolved by the United States’ National Park Service. They provide an extensive explanation of the history of iron-making, how it gradually improved with advancing technology, and its implications afterwards.

Oh if you are wondering why it was called “pig iron” take a look at this picture graciously already created and can be found on google images. It is a side by side comparison of young piglets feeding of their mother and iron being poured into the molds from a blast furnace! 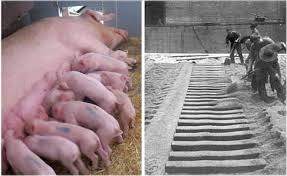