Posted on 20 February 13 by frydrykd

So for class this week we read a little bit about the Hidden Brain, and idea written down by Shankar Vedantam but readily recognized by many. This article is under copyright restrictions, so I found this NPR interview that pretty much exhibits the same concepts (plus it’s audio, so you don’t have to read!).  “Hidden Brain” is, as Dr. F so aptly called it, our “lizard brain.” Our consciousness below our consciousness.  Autopilot. It has a lot to do with what we observe without being told explicitly.  Specifically cited in the article was a case of 3-year-old bigots who knew to feel negatively toward dark faces while making positive associations with lighter ones.

What I want to get across tonight is a bit about the media (television and print advertisements) and how it has to do directly with preconceived notions of sexual identity specifically.

Exhibit A: The Easy Bake Oven

This is Hasbro’s website for the Easy Bake Oven.  When I looked this up the banner was brown with pink edges.  When the video started to play it was a pink sign on a purple background. The host of the video was a girl (wearing pink) giving cake decorating tips where both the cake and frosting were… pink. (I’m colorblind, so somebody correct me if I’m wrong.) Then there’s this, the Oven itself. Pink and purple, right? What is this telling to any young men who want to learn to cook? Baking is for women. Nowhere does Hasbro advertise that the EBO is for Ages 8+ and only for those with two X chromosomes. But they might as well, labeling it with colors such as above.  Come on, let’s be serious for a moment.  What could their target audience be OTHER THAN young girls?

But kudos go out to the Hasbro folks who introduced an EBO in blue, black, and silver at the behest of teen McKenna Pope, who wanted to buy an EBO for her brother. Having a rockin’ older sister FTW. This new “gender neutral” toy is just one of many joining the ranks now that companies are beginning to realize the pigeonholes their products place young, impressionable minds in.

Some more research seems to indicate that this trend continues.  Exhibit B is a page from a Toys R Us catalog out of Sweden. Here we find a young boy playing with a doll (dolls are for girls! right?) A young woman enjoying a typically male Nerf gun, and two youngsters playing house together. While this won’t sway every boy or girl to want their “opposite” toy, efforts like this will act to make those who do desire them to feel okay about it.  The subliminal messaging used in the media and advertisements are starting to trickle away.

What’s more encouraging may be this advertisement (Exhibit C) released by JCPenny on Father’s Day in 2012. It features Todd Koch and Cooper Smith, a same sex couple and their two children. JCP should be commended for continued support of the LGBT community (which started with a feud over a commercial featuring Ellen Degeneres – an openly gay woman) in an era where such bold statements are still taboo. 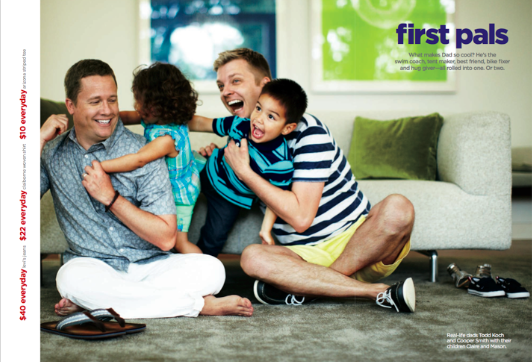 Gay couples are becoming more common in mainstream television thanks to such shows as Modern Family and The New Normal. And now that I think about it “the new normal” is exactly what these types of minority exposure are becoming.

And it’s about time.

As we begin to incorporate more and more gender neutral toys, advertise with “off-market” models, use real American families to sell products and act in television our Hidden Brains will begin to become accustomed to them.  This is not only the moral thing to do but it is very likely the best way to do it.  We’ve all been conditioned a certain way and messages like this help to un-condition our lizard brains. Well rehearsed rhetoric and passionate speeches will never change the minds of those staunchly against certain causes but these unconscious implicit messages might. Slow subtle changes are the only way to alter the course of a swiftly flowing river and these progressive steps forward do a great job of setting a new course in our understanding and acceptance of not just gender identity but overall equality as a whole.

This entry was posted in VT GEDI S'13. Bookmark the permalink.

1 Response to My Easy Bake Brain