Man’s first contact with fish mirrors the contact of man with many animals.  Fish were originally involved with humans as a provider of life.  Fishing villages and towns were able to thrive and progress due to the abundance of food provided by fish.    As these people progressed the importance of the fish was expressed in culture.  Fish were first harvested from the Nile by ancient Egyptians and ferried into man made ponds by Mesopotamians.  Fishing in Ancient Egypt was considered a sport, practiced by all social classes [3].

Fish can be seen in early mythology in religion as parts of Deities in Iran, Babylon, Syria and Ancient Egypt (Hutchins et al., 2004, pp 72-76).  Actual parts of ancient gods were depicted as fish or fish like.  This near worship of fish must have spawned from the sustenance provided by it to early civilizations.  The fish is evident in modern and ancient Christianity as well.  References in the bible include ‘fishers of  men’ and the fish symbol persists today in relation to Christianity(Hutchins et al., 2004, pp 72-76).  This symbol was originally used to distinguish Christians from non-Christians and also symbolized baptism [4].  Fish are evident in even earlier religions like Hinduism.  One of the avatars of the Hindu god Vishnu is the fish, which takes form to save man kind from the Great Flood [4].  The prevalence of the fish in Chinese and Buddhist symbols reflects their attitude and incorporation of the goldfish into their culture.

The persistence of the mermaid throughout human history, from Syria around 100 B.C. to the Little Mermaid, proves the fascination of man with fish and the depth of this relationship [5].  Early depictions of mermaids were negative and perhaps reveals mans fear and envy of the fish.  This fear most likely stemmed from the lack of knowledge man had of what occurred below the surface of the ocean.  In this sense it almost seems as if man at one time was almost frightened of fish or at least of their alien habitat.  Fish have also been a part of literature and art since early times, ranging from depictions in hieroglyphics and tomb carvings in Egypt to totem poles carved into fish by Native Americans. 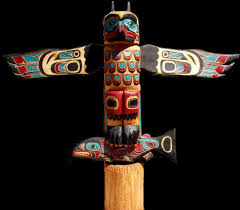 Unfortunately, the relationship between humans and fish has had mainly negative effects on fish.  Alteration in habitat, overharvesting, loss of wet lands and lowering of the water table are all issues fish face today because of humans (Hutchins et al., 2004, pp 72-76).

The specific interactions between Goldfish and Man are discussed and drawn upon throughout this blog.