Although I study animals, I do not study domesticated animals. Despite this, I know that sheep like to remain in flocks (or is it herds?), as they take the evolutionary approach of survival based upon the power of numbers. They follow each other around and do not stray far from others. They do not seek alone time; they do not follow a butterfly to greener pastures; and they do not question their version of authority. Because of this (and because they have no sharp teeth or claws to defend themselves with), sheep are considered meek. We even define the word sheepish as lacking self-confidence. Yet, our education system “trains” us to be just like sheep. We are taught that certain things are facts, and that is just the way it is. We are typically not taught to question, to ask “why”, or to contradict what authority says is true. In fact, it is commonly stated that once you get to graduate school you have to “learn to think for yourself.” So, let me get this straight – we spend 20+ years learning to think like others before it is ubiquitously expected for us to think individually!?!?

Reading Ellen Langer’s article “Mindful Learning” really hit this home for me. She discusses how we are taught the basics until the basics become second nature. We automatically drive on the right side of the road (in the US); we put forks on the left side of the plate when setting the table; and we don’t question “why.” Now, I am not suggesting that you got out tomorrow and see how you feel about driving on the left side of the road around here – some things we are taught should be followed. However, if you travel to England, you have to ditch your learned “second-nature” of driving on the right to be safe. I particularly liked the example about how we set the table. I had never thought about why we put the fork on the left side of the plate and the knife on the right. It really doesn’t make sense for the majority of the population, as right-handed folk typically hold their forks in their right hands and knives in the left. As a child, I was just taught that “this is how it is done,” and so, I accepted it.

As I got older, I was rewarded in school for blindly accepting what I was taught. I got A’s if I memorized what my teachers told me and did not do well when I didn’t. But what if the teachers are wrong (and having taught in the past, I can assure you that I was wrong sometimes)? Every day, research is showing us how things that were historically considered “common knowledge” are now incorrect (e.g., the world is flat; the Earth is the center of the universe; smoking doesn’t cause cancer). Every day, people prove that pushing the boundaries and not listening to what everyone told them furthers our understanding of the world. If everyone stayed a sheep, there would be no change. We need to start teaching children to think for themselves – it is as simple as saying “this COULD BE the answer to that question” vs “this IS the answer to that question”. In part, graduate school is so challenging because it is the first time we are truly and consistently evaluated on how well we can think for ourselves. Maybe, graduate school would be less daunting, less stressful, and less likely to cause or contribute to mental health concerns if we were “taught” how to think for ourselves.

I could go on and on about this topic. But I leave you with this: it’s good to be the “black” sheep (even though we are taught it is not). It’s even better to be a rainbow-colored lion. So go out there and ROAR! 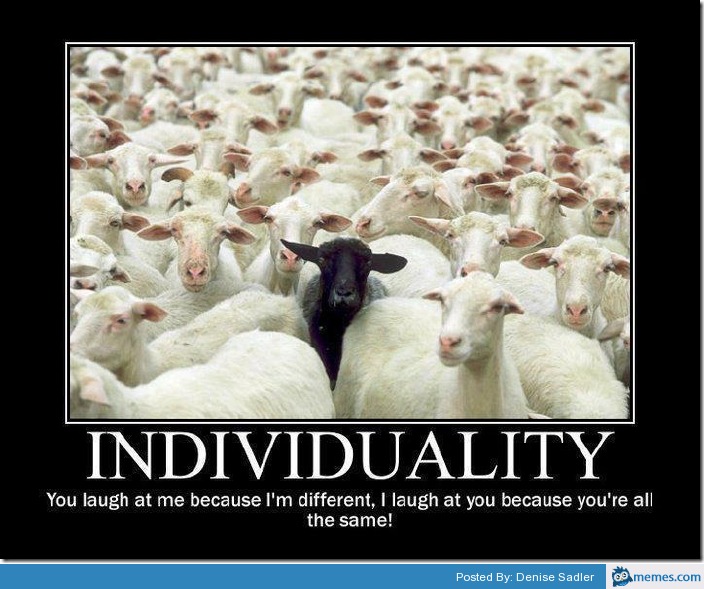