After reading another classmate’s post about propaganda usage in media and in the movie industry, I was intrigued and wanted to look more into the role that propaganda has, especially during war time. When looking at the Seventeen Moments in Soviet History, I stumbled upon a piece about the role of women in war time films. The article talked about the massive number of war films that were made during World War II, and mentioned that the majority of war films that were made actually did not focus on the wars themselves, but focused on average citizens, specifically women a lot of the time. The piece from the Seventeen Moments speaks about how movies were made to depict women stepping up and being strong supporters while the men were away at war. It also references the usage of women in recruiting posters across Russia, as seen below:

According to the Seventeen Moments article, the poster reads “The Motherland Calls You” and depicts a strong, weathered women who is calling for the men to step up and serve.

This Russian movement of using women in propaganda stuck out to me because I actually had a discussion about it in my “Modern Military History” class this past week. This usage of women in propaganda in WWII is very similar to the American usage of propaganda in WWII as well. Americans in WWII used posters and other forms of propaganda to compel women to “step up” as the men were away at war. Many women were recruited into the job industries to support war efforts, such as working in factories and assembly lines to support the male soldiers over seas. Everyone can recognize this iconic poster of Rosie the Riveter, which depicts a strong women showing other women that they can do the “harder” and “manlier” jobs: 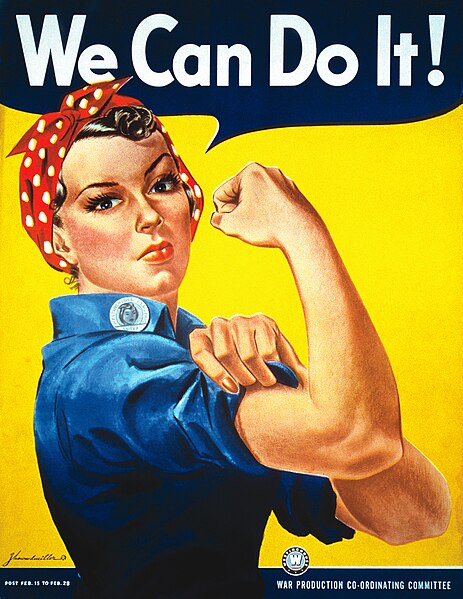 It’s interesting to see the shift in ideology in this era. With so much history of sexism and discrimination against women in the workplace in both the United States and Russia, it is ironic that during WWII they needed women to keep their workforce and economy afloat to support the war efforts. I think that the importance of women in World War II is too often overlooked and underappreciated. I think it’s important to recognize these propaganda efforts, the posters and the movies, that depict women as strong and brave characters that step up for their countries because I think it truly is a more honest depiction of the home fronts of the countries during the war.

7 Replies to “Rosie The Russian Riveter”