Factual information about photo from: http://www.loc.gov/exhibits/empire/architecture.html

When looking at the photographs taken by Prokudin-Gorskii, I wanted to really focus on the images that had a significant historical background to go with them. I felt as though the pictures with more background would really provide a better insight to the social and economic changes in Russia in their history. The photograph above taken by Prokudin-Gorskii is titled “View of the Nilova Monastery” and depicts the image of the monastery of St. Nil which is located in Lake Seliger, northwest of Moscow (Library of Congress).  Below is a map that vaguely shows a location of where the monastery is located in relation to Moscow: 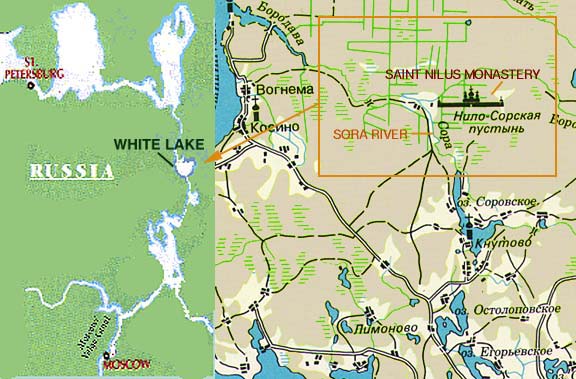 The reason that this image initially stuck out to me was because of the monastery’s massive size and incredible architectural structure. It is a large and beautiful structure and to me showed a demonstration of both Russia’s passion for their religion as well as their economic capabilities to build such an enormous religious facility. However, the main reason that the image was of interest was the history of the building as it stood for more than 300 years outside of Moscow. As per the picture’s caption on the Library of Congress’ site: The monastery was built in the 1600’s and was one of the largest and wealthiest monasteries of the Russian Empire (Library of Congress). It was used until it was closed by the Soviet Regime in 1927 and was used afterwards as both a concentration camp and an orphanage (Library of Congress). This history is extremely interesting to what we are looking at in class, as it shows a change of Russia’s religious and economic change right after the rise of the Bolsheviks. Another interesting aspect of the photo is that the photo which shows the monastery and all its size and beauty was taken in 1910, only 7 years before the rise of the Bolsheviks and 17 years before its closure (Library of Congress). The monastery was a place of great religious importance to the Russian empire, worthy of spending massive amounts of money to make it one of the largest monasteries in the entire empire. It’s extremely interesting to see a structure of that much importance then be stripped of its religious meaning only to then be used as a concentration camp. To me, the monastery’s history of going from monastery to concentration camp is the perfect epitome of the economic and religious change as the Russian empire evolved and shows just how quickly and drastically the ideals and values of a country can change.