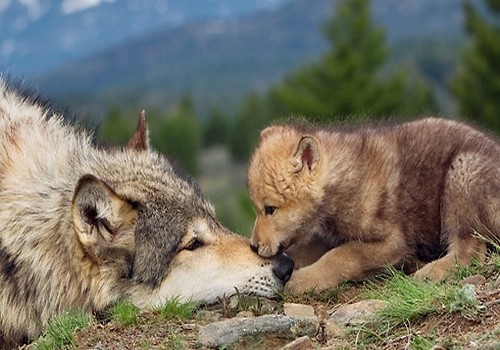 The domestic dog, Canis familiaris, is probably the most recognizable animal in the world by humans- an interesting thought given that it’s evolved to take so many different forms. They are the earliest domesticated animal, and one that we can attribute the most human qualities to; perhaps it is because have this that dogs have become such a large part of human culture. From Chihuahua to Great Dane, dogs have been at the side of mankind since prehistoric times. We have consistently maintained a distinction between our companion the dog, and our enemy the wolf, although genetically they are almost indistinguishable. So how did the Big Bad Wolf become Man’s Best Friend?

The process of species divergence is believed to have begun over 135,000 years ago (21). The creatures that evolved to be the wolves and dogs of today were an ancient canid species whose morphology we aren’t exactly sure of, though most assume they were more similar in appearance to modern wolves. However, although morphologically there is no evidence of species divergence prior to this time, fossil record suggests that humans and early canids began interacting closely long beforehand, at least 400,000 years ago, in the mid- to late Pleistocene Era (5). Bones of early humans and canids have been found in close proximity, indicating that they lived together (or at least in close conjunction with each other) and so must have had some relationship (5). As this interspecies relationship grew to be one of beneficial interdependence, slight morphological changes in the canids developed, probably as a result of artificial selection by humans, who valued certain characteristics more than others (5). As the characteristics of the canids who lived with people were controlled more and more with every generation, these “domestic” animals grew more and more differentiated from their wild counterparts, who would evolve to be the wolves we think of today (5). This slow change over thousands of years makes it hard to pinpoint when the domestic dog came into being as it is today; in truth, the species is constantly changing and will probably never stop. It is believed that the domestication process (and therefore species divergence) was finally complete sometime between 18-32,000 years ago (18). That’s not to say that interbreeding between wolves and dogs had completely stopped at this point- it still occurs today. Nor did people stop the domestication of wolves completely at this point it time. The details are fuzzy on when exactly the first “modern dog” came into being; after DNA analysis, a 33,000 year old canid skull found in Siberia was shown to be more closely related to modern dogs, but not completely distinct from wolves (15). However, the earliest evidence we have of the modern dog (as we know it) Canis familiaris was found in a grave from the Late Paleolithic era (approximately 14,000 years ago) in Oberkassel, Germany (5).

Although 33,000 years seems like a long time, many scholars believe it is not quite long enough to explain the huge amount of diversity found within the species of the domestic dog. Dogs come in all shapes, sizes, and colors, not to mention the diverse abilities of different breeds. Obviously artificial selection played a huge role in amplifying these characteristics, but the genes for all these variations had to come from somewhere, so where did they originate? The idea that the genome of just one early species of canid was capable of such variance seems unlikely, so the most popular theory today is that dogs actually evolved from different populations of early canids in different parts of the world (4, 21, 22). The earliest canids are debated to have originated in either what is now eastern Europe (16) or the Middle East (18). Regardless of where they began, however, they spread to cover most of Eurasia, and as the populations spread out they began to differ from each other (due to inbreeding and natural selection). By the time the domestication process had begun, these populations were diverse enough that the potential for variation was huge (5). Molecular and genomics research into this theory has shown that the large amount of diversity found in breeds today can be grouped in to four “clusters” (or “clades) whose major allele pools can be traced back to similar origins (13). The existence of these molecular “clades” further supports the necessity for dogs to have evolved from different populations of early canids spread around the globe at different instances in history (21).

Today, there are at least 343 breeds recognized by the FCI (Federation Cynologique Internationale), the most comprehensive authority on global dog breed standards (9). Other organizations recognize fewer, such as the AKC (American Kennel Club), based on national popularity of breeds (23). Most of these modern breeds actually only came about starting in the 1800s; before this time, older breeds existed  that have since died out or been combined with other breeds to create new ones (3). They spread long ago with their human companions to cover the globe- into the Americas across the Bering Strait between 9-12,000 years ago (11), and across the ocean to New Guinea and Australia about 12,000 years ago (5). This further increased the artificial selection and diversification of the dog. However, a new wave of artificial selection accounts for many breeds of dogs which have cropped up in the last 50 years; designer dogs are bred from existing dogs breeds in combinations intended to fulfill specific requirements, such as hypoallergenic fur (23). Dogs evolved alongside humans as our companions, and will probably keep evolving on a smaller scale as breeds are combined and recombined to fit human desires. Man’s best friend has truly been domesticated for just that reason; there are enough breeds of dogs (and mixed breeds) with such a variety of qualities that it can unquestionably said there is a dog for everyone-except perhaps cat people.