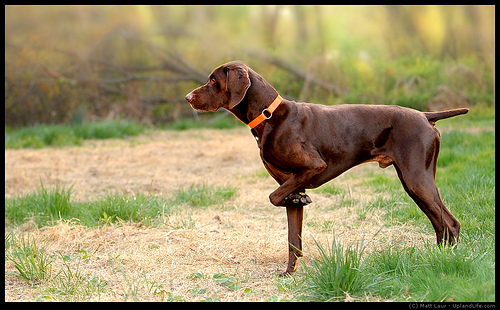 The speciation and evolution of the dog is completely a product of human interaction and artificial selection. Their most notable qualities- for example, communicative ability, loyalty, and affability- for which they are valued by humans as no other animal can claim to be, were selected for in their earliest ancestors, before the species even existed (8). Early canids had a similar social structure to early humans, so the process of selecting canids for behaviors that complemented human life and allowed them to live mutualistically with mankind became an evolutionary positive feedback loop which has lasted for thousands of years (8).

Selection for these qualities shaped the evolution and divergence of the dog in unpredictable ways; most notably, it has affected the species with paedomorphism (7). Paedomorphism is the tendency to retain qualities as an adult which are originally only found in the immature members of the species (7). An example of this is the behavior of barking (7). All dog species are prone to barking, however in wolves this is generally a behavior only found in puppies (7). Other paedomorphic characteristics are especially notable when comparing dogs, wolves, and wolf-dogs. An excellent case study of the drastic differences in behaviors is found in the non-fiction work Part Wild by Ceiridwen Terrill (17). However, many breeds of dog retain their “wild” tendencies as well, as exemplified in The Hidden Life of Dogs by Elizabeth Marshall Thomas (19).

This drastic influence on behavior as a product of domestication and artificial selection for dogs that get along well with humans are congruent with findings by Dmitri Belyaev’s team, who have been researching the possible mechanism of the domestication of the dog by attempting to achieve the same in foxes (20). They have found that selecting for human-friendly qualities in the foxes has led to rapid increase in ability to be domesticated in the foxes in just a few generations (20). Interestingly, although Belyaev’s experiment only focused on the behavioral traits of the foxes and not the physical, the team found that selecting for behavior also somehow influences the physical characteristics of the foxes as well. This effect is mirrored in dog behavior as well; dogs with more “wolf-like” physical characteristics tend to display more wolf-like behavior (19). This shows how powerful and essential human influence and domestication has been in the development of dogs as a species recognized for their unique behavioral tendencies which allow them to be such an important companion animal for humans, as well as how there have come to be so many different physical varieties of dogs.