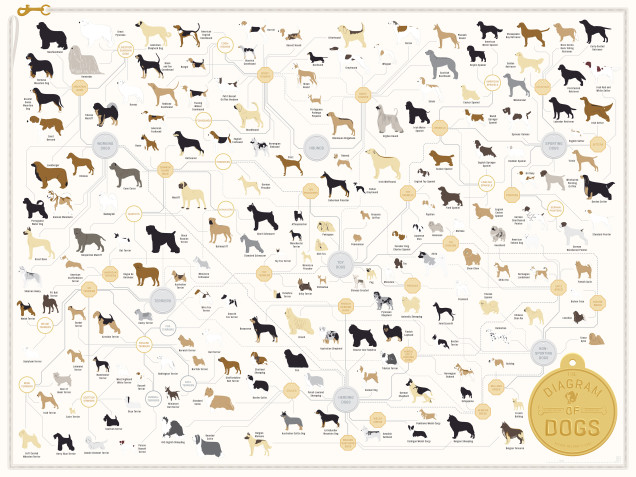 Over the last 33,000 years, the meaning of the “dog” has changed  from meaning a wolf-like canid to incorporating the hundreds of different breeds and phenotypes we are familiar with today. This is all a direct result of domestication. Humans selectively bred not only for behavioral traits, but for physical attributes as well. One of the first changes which probably occurred to the physical appearance of dogs is known as paedomorphosis; the big eyes, small size, and playful nature of adult dogs are found in the immature members of their wild counterpart, the wolf (8). These qualities were probably selected for because they increase the “cuteness” of the dog, and because they associate with behavioral traits that made the dog easier to control and tame (6). However, the most obvious change which has occurred in the species of the dog is the incredible amount of breed divergence; it is the most morphologically diverse mammal known  (13). Dogs range in size from the tiny chihuahua to the massive Great Dane. They can be as furry as a St. Bernard, or as hairless as the Chinese crested. Hair can be curly or straight, wiry or soft, and comes in a variety of colors and patterns. How could so many breeds develop within a single species? What’s even more incredible is that most of the breeds we see today didn’t develop over the last twenty-, ten-, or even one-thousand years; they were created over the last five hundred (13). Mutation doesn’t occur with enough frequency to account for all the genetic differences between breeds, so that means the capability to express such a variety of traits has been there in dogs all along. Most scholars agree that the variability stems in large part from the different locations in origin of domesticated dogs (13). They have been able to identify four “clusters” of genotypic and phenotypic variation (see figure below), which arose at different points in time during the process of domestication (13). The first (and genetically oldest) cluster consists of breeds which were generated via artificial selection in Africa and Asia, such as the chow chow and pekinese (13). These are the breeds which are most closely related to wolves, and are the oldest (the pekinese and chow chow are at least approximately two thousand years old) (13). The breeds in the most genetically different cluster from wolves, cluster four, are not as ancient, most originating within the last 500 years (13).

Why did we create so many breeds? Aside from pure aesthetic value, each breed comes with characteristics specifically selected for to serve a different purpose. Dachshunds were bred to hunt animals in burrows; German shepherds were bred to herd and protect livestock; Golden Retrievers were bred to retrieve (1). Many arose during the nineteenth century as part of a European effort to categorize and preserve traits in separate breeds of dogs (1). Unfortunately, however, most breeds come with some “side-effects” which are detrimental to their health: most Dachshunds have back problems because their joints cannot support them properly; German shepherds often develop hip dysplasia; Golden Retrievers tend to be plagued by skin problems. Interestingly, mixed-breed dogs are usually the healthiest. 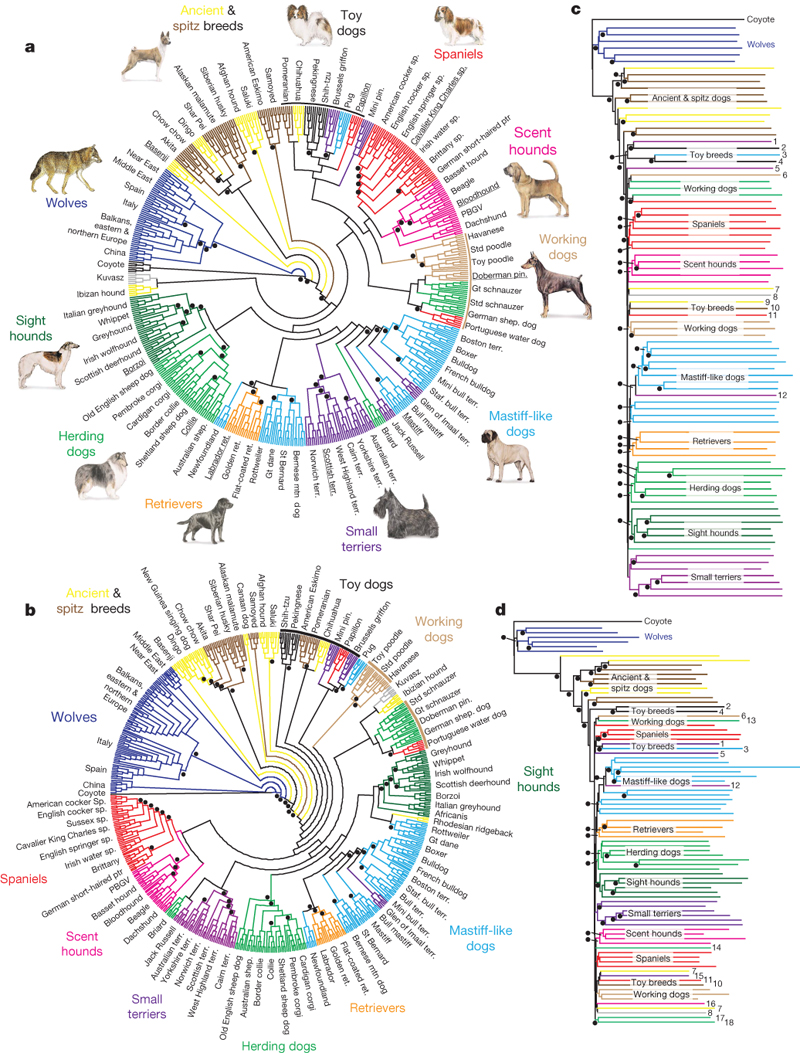 With such variation in one species, it’s no wonder that many scholars like Mark Bekoff believe that the true dog does not really exist; there is no singular word that can define such variation (2). Bekoff points out that there is an enormous amount of variation among individual dogs as well, like personality types in humans (2). And, as Bekoff also points out, the variation we’ve bred into our “best friends” has not really been in their best interest, but to serve our own purpose (2).

One thought on “III: Breeding and Speciation”