Norman Smith’s “Roman Hydraulic Technology provides a detailed description of the Roman aqueduct system as well as other water-moving technologies. The Romans used a civil engineering approach as well as information from conquered peoples to come up with solutions to the water supply issues. The main issue was irrigation: the Romans needed to haul in large quantities of water from great distances, and the problem grew as the empire expanded. The solution they cam up with is a complex aqueduct system that was unrivaled for 1500 years after the fall of the roman empire. 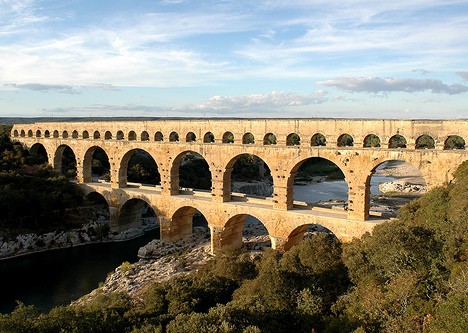 The system relied on a gradient in order for gravity to give the water a velocity. In order to keep the gradient from the water source to the city, bridges with arches for built in valleys. However, if the valley was too deep, the Roman built inverted siphons, which transported the water down the valley, and the momentum carried the water back up the other side of the valley into the receiving tank. Along tunnels, shafts called putei are used for regular repair and cleaning of the tunnel. Unfortunately, as one can expect, the quality of the water when it reached the city was subpar to say the least; however, not much was used for drinking (most was used for irrigation). In addition to the aqueduct system, water wheels were used to transport water to elevated heights. The Roman’s approach to transporting large quantities of water was adopted again by the British about a century ago to help fix the water problem in Victorian-era urban areas. In my opinion, this technology was one of the most important technologies to ever come about because without it the Roman empire would have not survived.