Charles Darwin has always been an iconic figure for me. His studies and conclusions have fascinated me for as long as I can remember. Along with Louis Pasteur as I mentioned in my last post, Darwin is among the scientists that really led me to pursue studies in the field of science. Perhaps the great beards have something to do with my appreciation for this pair, but the real reason that I like these guys is their complete dedication to their work and their major contributions to the field of science as a whole. No matter what it is that you want to be when you grow up, you will run across these names and I think that speaks volumes to their importance to mankind. 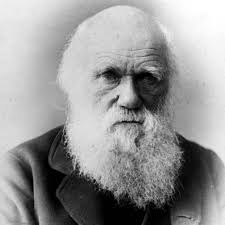 Now that I have given that little background tidbit, I will attempt to bring up the interesting points from the excerpts from Darwin’s The Variation of Animals and Plants Under Domestication and Brantz The Domestication of Empire without too much bias hopefully. Overall, both readings were pretty good. I particularly liked reading Darwin, for reasons previously stated, but also because the ideas he discussed are so far ahead of his time in my mind. He made some very profound arguments with very little previous scientific discovery in the field of his studies. It is truly baffling to me how an idea like natural selection could be so soundly described without any knowledge of DNA or genes. Even though we have obviously proven that some of his ideas, especially pangenesis, were not quite right, there was a great deal of truth to many of his hypotheses that are still accepted today.

In regards to The Domestication of Empire, Brantz did a really great job of highlighting the trends of civilization and evolution and how they influenced each other. I still am taken aback by how much domestication has influenced all aspects of our lives, and I really liked how the trend of civilization kind of blended with evolutionary studies to explain some of these influences. In addition, I must confess that I was left with a feeling of human selfishness after reading through this excerpt. It seemed that every new subject that was brought up whether it was the keeping of pets, or the development of animal protections, or the creation of zoos was, at its core, done primarily for human advancement. I will make this opinion more clear later in some of the questions that I came up with from this reading.

Here are some questions that we can use to get the discussion going for Tuesday. Please feel free to comment on them here or just think them over before we get together.

Darwin remarks that “Man has no power of altering the absolute conditions of life, he cannot change the climate of any country, he adds no new element to the soil…” and he then goes on to say that it is an error to speak of man “tampering with nature”. Does this statement still hold true today? Has man evolved to the point where we now have the capability to control many aspects of nature or are we still at the mercy of nature? We have altered climates with pollution and added fertilizers to soil and are in the process of being able to prevent natural disasters like hurricanes. Would Darwin still argue that man cannot tamper with nature?

Darwin suggests that the natural change that organisms experience is analogous to that which humans are causing, meaning man can only use the variations which nature brings about to shape domesticated animals. With things like genetic engineering we are now able to take a bioluminescence gene from a lightning bug, and create a glowing mouse. Is this something that nature would be capable of? Or is the fact that nature provided the gene in the first place still in support of the idea that man is only able to use what nature provides? And in relation to this, is man or nature more efficient at creating new species. Is man more efficient at using variations in animals to make new sub species or even new species all together because of the speed by which we are able to breed animals for a specific trait, or does natures method of survival of the fittest still provide the gold standard for evolution? Has man eclipsed natures evolutionary abilities, or are we still far behind creating new species as efficiently as nature?

Whether by nature or by man, everything from plants to animals to bacteria is constantly evolving. As soon as it seems that an organism is perfectly suited to its environment, its prey or predators get a slight edge, and the species must evolve once more. Do you think that a perfect species could ever be created? Or does the constant battle of organisms to adapt to changing environments prevent this from happening?

Are humans the exception to the rule of natural selection? Can weak individuals thrive in our current society, and can  the strong fail? Is the human race always getting better, or does the fact that the average lifespan of this generation is predicted to be less than that of the last evidence that we are declining? Darwin describes a point at which simple organisms halt development for an indefinite amount of time due to a fit with the simpler conditions of life. He mentions that “members of a high group might even become…fitted for simpler conditions of life; and in this case natural selection would tend to simplify or degrade the organization, for complicated mechanism for simple actions would be useless or even disadvantageous.” Could humans be undergoing some sort of degradation due to natural selection? Or does this idea not apply to the downturn, if one exists, in human evolution?

An entire portion of Darwin’s work was devoted to the study of pigeons. He discusses the many variations that exist between pigeons and how each of these traits has been altered by humans to create the hundreds of sub species of pigeons today. How long can pigeons continue to be altered like this? Is there a stopping point where a species can’t change further without being infertile or sickly? Or do they just change to the point that they become a new species altogether? Is human intervention resulting in the evolution or devolution of species like the pigeon? Do methodical and and unconscious selection actually hamper an animals fitness, or ability to succeed and reproduce, in many cases? 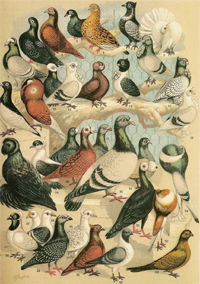 Darwin presents some very interesting examples of artificial and natural selection working hand in hand. For example, he describes a species of pig in which black pigs are immune to a disease caused by a type of root that they eat while lighter colored pigs get sick. As a result humans select for black pigs artificially. Do situations like this, where artificial and natural selection work together result in “super animals” that would not have evolved without the combination of humans and nature?

What is everyone’s opinion on Darwin’s idea of Pangenesis? Obviously, we know today that this is not the method by which reproduction and development occurs; however his method has many similarities to what actually happens. Do you think that his ideas in this book led to the actual discovery of our accepted theory today and does Darwin deserve credit for this? It really doesn’t seem to be too much of a jump to get from what Darwin proposes to what we know today.

In The Domestication of Empire, it says that “while evolution brings humans and animals closer together biologically, the concept of civilization drives them further apart socioculturally and intellectually…”. Do you agree with this statement? I struggled with this idea initially but after reading the entire excerpt, I found myself more in agreement. Evolution really ties us all together, and the process of civilization does seem to place humans on a pedestal above everything else.

What would civilization be like without domestication? Domestication has influenced everything in our lives from hierarchy to food production to transportation and I can’t help but wonder what things would be like if humans hadn’t taken those first steps toward domestication. How would things be different? Is it even plausible that domestication could have not happened? Was it predestined to happen?

There was a lot of discussion of pets by Brantz which led into all sorts of topics from the cat vs. dog debate to dressing up animals to animal protection. All of these ideas presented some really cool information for us to discuss but since this blog is getting a little bit lengthy I will just ask a few questions and we can dig into the further in class.

Do you think that people dressing up their animals and grooming them has an effect on the animal?

Is the root of animal protection really just human selfishness, in that humans only protect animals to the extent that they are beneficial to us?

Why do humans have such a strong desire for exotic pets?

Three groups of animals are mentioned in the reading: animals as servants, animals as children, and animals families as human families. Do these same divisions still exist today or are there more or less?

Are zoos a good or a bad thing?

Can domestication be viewed as an improvement of animals as Cuvier suggests?

Well there are some questions and ideas to chew on for the next couple of days. I look forward to hearing what you all have to say in the comments and on Tuesday!