In the late 1930’s, the Soviet Union had an intense focus on military preparedness as well as loyalty. The Red Army went through a series of purges due to Stalin’s perceived lack of loyalty. His purges were especially focused on higher ranking leaders of the army. The military preparedness came from recent conflicts with Manchuria, Japan, Eastern European States, and their anticipation of conflict with Germany. The USSR preached military preparedness through various propaganda campaigns. A main point in much of their propaganda was how prepared they have made their citizens for transferring between average life and life as a solider. They put a focus on how they incorporated everyday technology into the military. For instance, the Soviet Union introduced tractor technology on collectivized farms that were similar to their tank technology. This allowed tractor drivers to easily transition to tank drivers for the army. 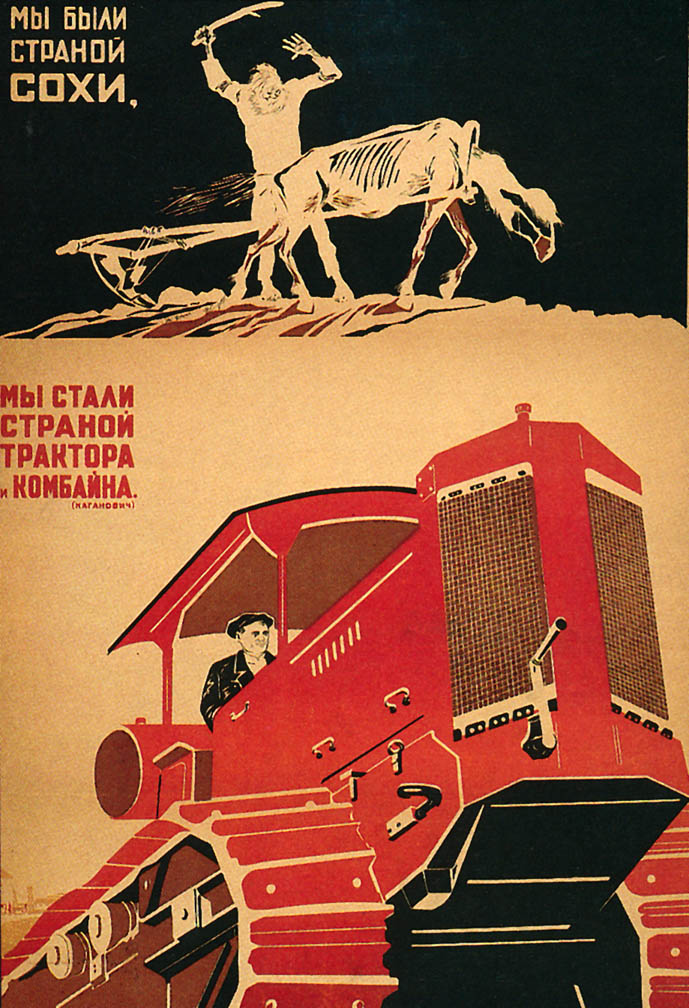 The above picture shows the death of farming by plow and the emergence of the tractor. This tractor also happens to resemble a tank, which implies that the technologies of the tank and tractor at that time period were nearly interchangeable.

The military preparedness of the Soviet Union, especially in reference to tractors and tanks was exemplified in the 1939 movie directed by Ivan Pyriev, Tractor Drivers. This popular movie was the story of three tank men who would return home from their victory in Manchuria to continue to live their life on collectivized farms as tractor drivers(1). This movie was an important cultural piece of its time as it sent various messages to the public. First of all, it was supported by Stalin and served as military propaganda to show preparedness as well as success. It gave the impression that the Soviets were ready for war and could defend themselves to the East and the West. “This movie also showed the amicable union of peoples in the healthy Soviet organism since the characters were a Georgian, a Ukrainian, and a Russian(1).”

6 thoughts on “Tanks and Tractors”