Holly recently wrote about how scholarly journals get articles from academics (whose time is paid for by their universities and in many cases by our tax money if it is a state university) and then turn around publish them and charge the higher education institutions exorbitant subscription fees to get access to journals.  I also learned from a friend who is a professor at VCOM that he and his colleagues have to pay the journals from $500 to $800 per article to get their research published! In most cases, the universities pay for their research professors the fees to get their work published.  I was not aware of this at all! So last week’s Economist magazine there is an editorial precisely about this topic (they must have been reading our minds and/or present in the New Media for Faculty Seminar when we were having this discussion).  Here is the editorial below and I look forward to your comments: http://www.economist.com/node/21552574

When research is funded by the taxpayer or by charities, the results should be available to all without charge 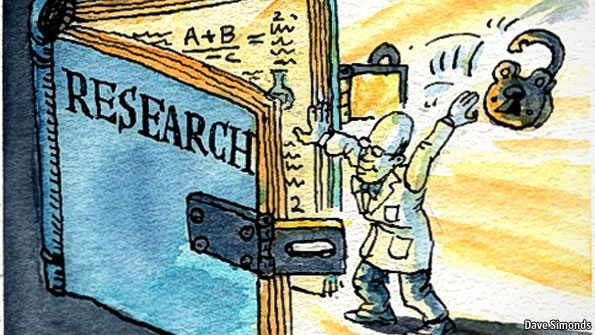 PUBLISHING obscure academic journals is that rare thing in the media industry: a licence to print money. An annual subscription to Tetrahedron, a chemistry journal, will cost your university library $20,269; a year of the Journal of Mathematical Sciences will set you back $20,100. In 2011 Elsevier, the biggest academic-journal publisher, made a profit of £768m ($1.2 billion) on revenues of £2.1 billion. Such margins (37%, up from 36% in 2010) are possible because the journals’ content is largely provided free by researchers, and the academics who peer-review their papers are usually unpaid volunteers. The journals are then sold to the very universities that provide the free content and labour. For publicly funded research, the result is that the academics and taxpayers who were responsible for its creation have to pay to read it. This is not merely absurd and unjust; it also hampers education and research.

Publishers insist that high prices are necessary to ensure quality and cover the costs of managing the peer-review process, editing and distribution. High margins, they say, are evidence of their efficiency. Clearly the cost of producing a journal is not zero. But the internet means it should be going down, not up. Over the past decade many online journals and article repositories have emerged that are run on a shoestring. Some have been set up by academics who are unhappy with the way academic publishing works. (Since January some 9,500 researchers have joined a boycott of Elsevier.) In several cases the entire editorial boards of existing journals have resigned to start new ones with lower prices and less restricted access.

But the incumbent journals are hard to dislodge. Researchers want their work to appear in the most renowned journals to advance their careers. Those journals therefore have the pick of the best papers, remain required reading in their fields and have strong pricing power as a result. What is to be done?

There is a simple way both to increase access to publicly funded research and to level the playing field for new journals. Government bodies that fund academic research should require that the results be made available free to the public. So should charities that fund research. This would both broaden access to research and strengthen the hand of “open access” journals, since many researchers would then be unable to publish results in closed ones.

There are some hopeful signs. The British government plans to mandate open access to state-funded research. The Wellcome Trust, a medical charity that pumps more than £600m ($950m) a year into research, already requires open access within six months of publication, but the compliance rate is only 55%. The charity says it will “get tough” on scientists who publish in journals that restrict access, for example by withholding future grants, and is also launching its own open-access journal. In America, a recent attempt (backed by journal publishers) to strike down the existing requirement that research funded by the National Institutes of Health should be made available to all online has failed. That is good news, but the same requirement should now be extended to all federally funded research.

Open access to research funded by taxpayers or charities need not mean Armageddon for journal publishers. Some have started to embrace open access in limited ways, such as letting academics post their papers on their own websites or putting time limits on their pay barriers. But a strongly enforced open-access mandate for state- and charity-funded research would spur them to do more. The aim of academic journals is to make the best research widely available. Many have ended up doing the opposite. It is time that changed.

from the print edition | Leaders