Here’s where I live and where Fincastle, Virginia is: 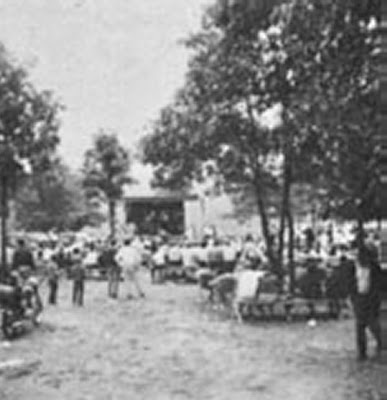 Set the stage for:

Fincastle, Virginia set the stage for many other festivals to come. Sadly, the festival did not stay at the Cantrell sight very long. The festival was moved to Lithia, Virginia (which is 10 minutes from the original site) around the late 1960s-early 1970s. Today, there are not any festivals held in Botetourt County, but many people still pick the guitars and play “them ol’ fiddle tunes” on the streets on Friday nights and pack the fair grounds every August at the fairs.

As the title of my blog states, Fincastle, Virginia was just the beginning, it has since set the ideas and ways that festivals are held today and will be held for years to come.

On Monday, we were given a worksheet with lenient directions to go listen to what is around us as we walk to different places. The first place I went was the Duck Pond on campus because it is away from all the hustle bustle of campus and it is a quiet place to just relax. It also reminds me of the ponds in front of my house back home.

While at the Duck Pond, I watched ducks glide across the pond, birds congregate in trees, and geese go “fishing”. There were other people around me, but I managed to block them out and focus on what most would miss. While focusing on the natural world and not the human aspect of the pond, I was able to hear the geese and ducks swimming under the water and pushing against the water with their feet. I heard a turtle break the surface and then stealthily slip back under where he thought I could not see him. It is amazing at what you can hear if you just stop and listen.

I then went to Main Street in Blacksburg. Talk about a definite shift in speed. Main Street is always busy. There were cars and people, stop signs and traffic lights. Bikes and mopeds. Everyone was running around the sidewalk trying to get to a job, a meeting, a friends house, a party, anywhere fast. It seems as though no one truly stops to  take in the moment. If they stop, they would be able to hear the footsteps of people as they walk by, the soft sound of jackets swishing as people walk, and bookbags softly tapping peoples backs. It’s amazing what you can hear when you stop and listen.

It is the same when it comes to Bluegrass music as well. The newer music, formally known as “New Grass” may not initially sound the same as what Bill Monroe played, but if you listen close, the fiddle still whines, the banjo still resonates, and the guitar still has the old twang to it.

In class we have been discussing the gender, race and class struggles within Bluegrass music. It is clear that Bluegrass was, and to a point, still is, primarily a white men music. Most all of the Bluegrass performers in the 40s, 50s, 60s, and 70s, were white males. The Carter Family was one of the first to officially step out of the norm.

The Carter family involved mainly females. It was unheard of that females could be onstage with a male, much less sing songs and play instruments. The Carter Family made a name for themselves by breaking the norm. They were a big hit everywhere they went. They were the “First Family of Country Music” after all. I would and will argue that you can classify The Carter Family as Bluegrass as well as country music. They have the sound, the instruments, and to me, they have the heart and soul of what I believe is Bluegrass.

By recording at the Bristol Sessions, they set the stage for other women to record, whether that was their goal or not. It was one of the first times that women’s voices were heard on the radio. I never fully considered what they did as a stand against the gender norms, but looking at it from a different perspective, I could see how they did break the gender norm back then.

Then you have the Carolina Chocolate Drops:

The Carolina Chocolate Drops are considered Bluegrass to me as well. They majorly break the Bluegrass norms by having a female singer/instrumentalist, and they do not fit the standard white men norm. There music is just as Bluegrass as any other band, and I kind of enjoy listening to their music. By breaking the norms, they are able to open the doors for others.

I believe both the Carter Family and Carolina Chocolate Drops pushed to break the norms that have always been associated with Bluegrass. Though, it may not have been their over all intentions when they began performing, I believe both groups have made a statement and have helped to open doors for so many others, as well as, opening the minds of people who enjoy the music.

In class we discussed “genres” briefly today. It kind of struck me a little differently than I expected. It brought back an old memory of mine I had long since forgotten. It reminded me of when I was a kid and I asked my father and grandfather what made country music country music. I remember my father turning to my grandfather anticipating an answer from him. My grandfather simply said, “It is whatever you want it to be. If your heart thinks it’s country, then it must be country.”

His words were in my head today when we discussed genres. I came to the conclusion, that genres are mainly used to help people find and classify the songs they enjoy. I posted a couple weeks ago about what classifies bluegrass music as bluegrass. The theory that I came up with then still stands true in this blog. Music is what you classify it as. If you believe the music is country, then by all means it is country. If you want to believe a banjo, fiddle, mandolin, and guitar is Bluegrass, then it’s Bluegrass.

Ricky Skaggs is one of my favorite performers. I remember his songs being played on the radio in the truck back home. His song, “Country Boy”, was one that I truly fell in love with. The song was reassuring when I went to college because the meaning of the song, to me, was that no matter where I go or what I do, I will always be a country girl in my roots.

Anyways, in the readings we looked at the other day, it discussed Ricky Skaggs and how his concerts were set up. It discussed how he would do Bluegrass than country and vice versus. It makes sense that he would add or take away instruments in order to appeal to a greater crowd. In a sense, he would genre hop a lot within the concert alone. I think most artists who genre hop are more interested in trying to make more money and appeal to greater audiences. However, I feel Skaggs just wanted to return to his roots. His song, “Country Boy” did appeal to that. My favorite verse, “I may look like a city slicker/Shinin’ up through his shoes/Underneath I’m just a cotton picker/Pickin’ out a mess of blues.” discusses how he may look one way, but in fact he knows who he is and where he started. I think the ones that genre hop know where they came from and know where they are going. As I mentioned early, however, I believe that the genre should only be classified by yourself. You should decide what kind of music it is and believe that. If you want to believe Mumford and Sons is straight up Bluegrass, then that is your choice, not anyone elses.