For the New Media Symposium this semester, I just read Vannevar Bush’s “As We May Think” (1945), but before I go to comment on that, I’d like to make a comment about ideas floating around in the clouds-in-my-head from Murray’s introduction to the New Media Reader (2010), of which Bush’s piece is the first we’re reading together.

I love dichotomous arenas.  They set up a playground of ideas floating between what seem like hard-edged concepts and create a colorful swirl of notions between the cracks.  Murray sets up the NMR like a binary playground: between a world of “the forking path garden [where] time does not mover forward at all but outward in proliferating possibilities of creation and destruction that make up the totality of human potential” and “the Enlightenment faith in human progress driven by expanded knowledge, the American metaphor of the rich frontier waiting to be conquered by the the able trailblazer, the absolute necessity of self-defense” (p.4).  So, the humanists and the engineers draw a line between themselves again, waiting to play out another psychosocial battle on our eyes and ears.  Well-trodden ground for me.

I’m certainly in the battle.  I grew up an expectant Engineer, told from a young age that logic prevailed and would build a better world; pointy-eared Spock stood as our emblematic hero in my household.  But I was also aware that the most interesting episodes with Spock were the ones where tears would appear in his eyes or rage fill his actions.  It was in those moments, where logic was tested that the Kirk would stand tall — the human in us able to balance between the master tactician and the feeling human.  It was interesting how much original Star Trek imagery came to mind when reading Bush’s “As We May Think.”  His description of the Memex desk, for example, was the original bridge design for the Enterprise: transparent read out panels with mnemonic light configurations and many, many levers and buttons to make the mechanics of the computer work.  Spock’s main job was often to serve as a go-between for Kirk’s desired information and the wealth of information stored in the computer banks (probably on microfilm for the most part). 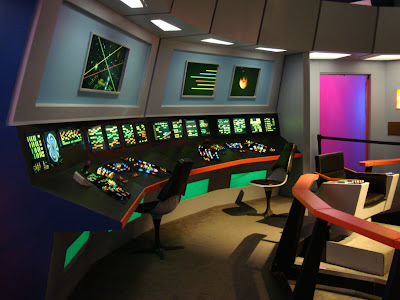 This carried me through my education: though I was being trained in mathematics and science, I felt the passion of literature and art, history and sociology.  It took a few brave individuals to show me that these are not hard-edged bricks building a wall between two sides but a potential fuzzy set of clouds that can intermingle to create real human experience.  It took many years for me to become comfortable with this notion.  As Murray put it, “The engineers pace themselves against an accelerating threat of annihilation by the new war technologies; the humanists imagine the machine as a redemptive environment, welcoming the prospect of cyborg architectures that reconfigure our bodies, our cultures, our selves in hopeful ways.  The two traditions come together most energetically in collaborations focused on new structures of learning in which exploration of the computer is motivated by a desire to foster the exploratory processes of the mind itself” (p.5).

And I feel comfortable in that cyborgian merger.  If you haven’t read much Donna Harraway, I recommend it.  The Cyborg Manifesto and the Cyborg Handbook are two of my favorite reference peices for understanding this framework.  We have already reconfigured our bodies/cultures/selves in cyborgian manners, especially here at VT.  We have already begun to seek new meanings in these configurations.  I teasingly call my daughter a cyborg: at 6months of age, she was diagnosed with noncommunicating hydrocephalus with unknown origin (probably just a structural randomness of cell growth, unlike the trauma that often is identifiable in these cases).  Just 40 years ago, it would have been likely fatal; up until the 1920s, the solution was to drill holes in the head to relieve the growing CSF pressure, which clearly wasn’t much of a solution.  Now, she has a high-tech pump inserted in her brain that is incredibly sensitive to pressure fluctuations and helps to drain fluid as needed into her abdominal cavity.  One hour after the surgery, she was noticeably different; six months after the surgery, you wouldn’t have guessed it was there at all.  What was different?  (Hard to know exactly with a six-month old, but let me artistically hypothesize…)  She could think again.  She had had blinding headaches for probably 1-2 months, which wouldn’t let her do much as a young’un.  She couldn’t learn to crawl, count, sit up do much except process this pain.  But, take that pain away and she became/is becoming this wonderfully thoughtful, expressive person who is highly lingual and sensitive to human feeling.  The technology facilitated the human.  Okay, okay, overwritten and now I’m feeling overextended with the thought.  Touchy daddy.

The shunt system that saved my daughter’s life.