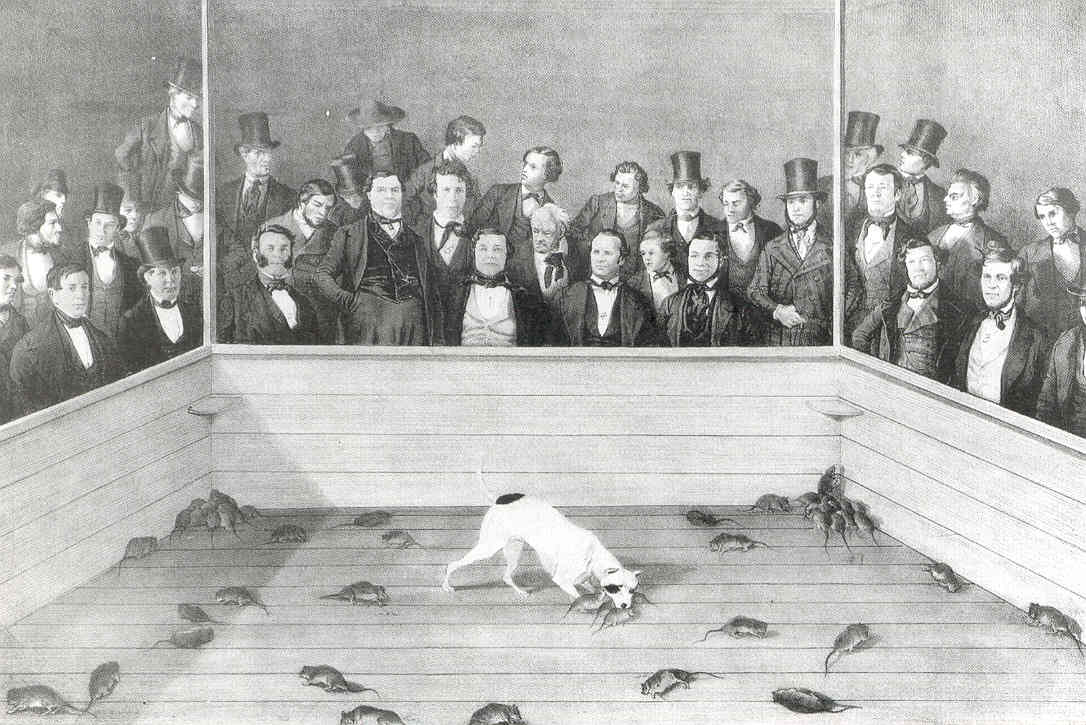 People all over the world have always had a fascination with death and killing.  It has been a sport to people for most of history, whether it is human or animal being the killer or the killed.  Animal fighting has been a common sport for much of modern history, one typically associates dog or chicken fighting with this violent sport, but rats too have found their share of “fame” in the pits.  While no longer a common animal used in sport fighting, during the Victorian period, rat fighting was a common sport among the poor of England as well as with immigrants in the Americas.

Rats naturally often fight, whether it is for food, fun, or mating.  From about 18 days after birth until death, rats fight each other, often for play [1].  However, there is a big difference in play fighting and actual fighting among rats.  In play fighting, rats typically target the nape, the back of the neck, whereas in actual fights there is more targeting and defending of the romp, the lower end, of the rat.  An interesting occurrence happens in rats, the rats who typically initiate the play fight when younger tend to become the more submissive rats of the group, whereas those who are attacked the most tend to become the more dominant males of the group.  This is due to the rats that are attacked more learning better counter-attacked techniques and by the time they reach sexual maturity, they are able to have the upper hand.  This nature of fighting lets Norway rats become perfect animals for baiting.

The London pub is “a social arena like no other: a place of both conflict and comfort – rivalry and camaraderie – and where all troubles can be washed down with a pint of ale” [2].  In these pubs, gaming and gambling were common practices for many to participate in, such as skittles and cribbage.  However, there is also another common past time for many upper and lower class citizens, ratting.  In this sport, people would place bets on how many rats a dog could kill in a given amount of time or how long it took the dog, usually a  to kill all the rats in the pit.  The record is held by a terrier named Billy that supposedly killed 100 rats in five minutes and thirty seconds, equating to a rat every 3.3 seconds.

Henry Mayhew gives an account of vising a rat pit in his volume of London Labour and the London Poor [3].  In 1851, Mayhew visited with the famed “Queen’s Ratcatcher,” Jack Black who would catch rats for several pits and sell them to the proprietors of the pubs and other pits.  In which, Mayhew and Jack Black discuss the sport, and how Black raises ferrets for the sport.  James Wentworth Day, who followed the sport, described the rat pits as:

“This was a rather dirty, small place, in the middle of the Cambridge Circus, London.  You went down a rotten wooden stair and entered a large, underground cellar, which was created by combining the cellars of two houses.  The cellar was full of smoke, stench of rats, dogs, and dirty human beings as well.  The stale smell of flat beer was almost overpowering.  Gas lights illuminated the centre of the cellar, a ring enclosed by wood barriers similar to a small Roman circus arena, and wooden bleachers, arranged one over the other, rose stepwise above it nearly to the ceiling.  This was the pit for dog fights, cockfights, and rat killing.  A hundred rats were put in it; large wagers went back and forth on whose dog could kill the most rats within a minute.  The dogs worked in exemplary fashion, a grip, a toss, and it was all over for the rat.  With especially skillful dogs, two dead rats flew through the air at the same time…  [4]” When immigrants arrived in America, they brought many customs, traditions, and sports with them, rat baiting was no exception.  One famous rat pit in American, Sportsman Hall, was owned and operated by a famous rat fighter named Christopher Keybourne, more commonly known as Kit Burns [5].  Kit Burns was born in Donegal, Ireland and moved to New York when he was a young boy around 1830.  Rat killing in the Sportsman’s hall consisted of dogs, weasels, ferrets, and sometimes humans.  When humans entered the pit, they were expected to bite the head off the rats.  As with most sports involving the death of an animal, there was a large amount of resistance to the sport.

Henry Bergh, who was the founder of the Society for the Prevention of Cruelty to Animals, began a campaign attacking animal cruelty in New York.  He set out and began shutting down all pits that involved rat and dog fighting.  Kit Burns was able to escape the raids by using an exit through a tunnel he designed in the basement of the Sportsman’s Hall.  However, Kit was eventually caught in a raid and arrested.  Kit eventually turned the Sportsman’s Hall into a mission and home for wayward women, named The Kit Burns Mission and opened another saloon for one last rat fight.