For all of human history, people have had to deal with the problem of rats.  In the last post, I discussed how rats have had a very negative connotation associated with them and have been viewed as pests.  A few interesting questions came up throughout the research, how have rats been dealt with in the past?  How long have rats been viewed as a pest whose population needs to be controlled?  How are their populations controlled?  Why have rats not been eradicated if they were not naturally found in the Americas?  I believe the history of rat control, as well as pest control in general, is a vital part of the understanding of how rats have affected the environment of cities in the United States. 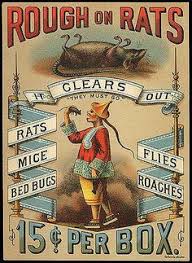 For most of human and rodent history, humans have tried to eliminate or at least control rat populations.  As early as the Mongolian nomads, people have associated rodents with disease and have tried to avoid them [1].  Rats were even killed in Europe due to belief they were spreading the Bubonic Plague.  This led to cities hiring rat catchers to try to handle the problem of exterminating the rats.  One such famous, and most likely exaggerated, tale that has been told in many stories and tales for children is that of Germany’s Pied Piper, who has hired to get rid of rats in the town of Hamelin [2].  As many people know, the Piper would play his pipe and would lure the rats away from the city.  While this story is most likely fictitious, it does represent the overarching theme the cities were trying to deal with their rat problems.

In Pests in the City: Flies, Bedbugs, Cockroaches, and Rats, Dawn Day Biehler disusses how since there was no public rat control in homes, the job fell to private households and hiring help [1].  Simple methods were often used such as keeping a cat, repairing the house, setting traps and poison, and simply killing rats with a weapon.  From this, rat-catcher businesses began to appear to either sell poison and traps or offer extermination sources.  One famous example of a rat-catcher is Jack Black [3].  Known as “the Queen’s ratcatcher,” Jack Black was probably the most famous rat-catcher of the 1800s in London.  Jack Black was hired by many to catch rats and is well documented, such as the encounter Henry Mayhew had with him in 1851.  In America, the first known professional rat-catcher was Walter “Sure Pop” Isaacsen [4].  Isaacsen opened a shop in Brooklyn in 1857 selling poison and using ferrets to hunt and kill rats.  Isaacsen even famously ended a rat infestation in Central Park Zoo, in which he caught over 475 rats in the first week.

From these smaller private businesses, more modern pest control began to evolve.  In 1936, the National Associatation of Exterminators and Fumigators officially changed the name of the position of rat exterminator to pest control operator, citing that the word extermiate was too high of an expectation [4].  In 1949, the city of New York founded the Rodent Control Unit as a method to provide public rat extermination.  Today, insecticide and pesticide use now dominate the modern pest control methods.  DDT, the most famous pesticide, was first synthesized in 1874, but was not known as an insecticide until 1939.  The first generation of pesticides consisted of kerosene, sulfer, arsenate of lead, and nicotine sulfate and were applied by Flit guns.  After WWII, more powerfore pesticides were developed and were used intensely until the 1970s when Rachel Carson published her famous book, Silent Spring, in which the environmentally dangerous side effects of pesticide use were discussed and how they were killing birds and other animals.

Today, numerous companies exist to help people deal with their pest problems, including rats.  There are now nationwide pest control companies, such as Orkin, Dodson, and many others who specialize in pest control for both commerical use and private homes [5].  These companies also try to teach people how to prevent pests in their home.

Rats have always been a problem that people have tried to exterminate or at least control.  The history of rat control does have some serious environmental implications, such as the problems caused by the extensive use of pesticides.  However, conventional methods seem to be able to control rat populations much more than playing a flute.