“Our strategy should be not only to confront empire, but to lay siege to it. To deprive it of oxygen. To shame it. To mock it. With our art, our music, our literature, our stubbornness, our joy, our brilliance, our sheer relentlessness – and our ability to tell our own stories. Stories that are different from the ones we’re being brainwashed to believe. The corporate revolution will collapse if we refuse to buy what they are selling – their ideas, their version of history, their wars, their weapons, their notion of inevitability. Remember this: We be many and they be few. They need us more than we need them. “

Roy provides a fitting introductory quote to this weeks’ text assignments; there is something exciting happening, a fluidity, a momentum, a movement is being built around us and by “us” yet, with all this excitement, there seemed to be an air of caution, as if we were working for change while balancing on eggshells. Janet Conway’s book, “Edges of Global Justice” dealt less with justice than with the knowledge’s utilized to re-build counter-spaces to globalization. Focusing on the World Social Forum (WSF) she leads the reader through tough questions of gender, unequal development), the conceptualization of a (global) civil society, autonomous space, and subaltern subjectification.

For the leadership or anchor essay, I am focusing on “The Entangled Geographies of Global Justice Networks (GJN),” by Cumbers, however, each of the readings weave together. According to Cumbers, GJN’s are a series of “overlapping, interacting, and differentially placed resourced networks” that work together, in affinity or solidarity, against a common denominator, if not towards a common goal. Cumbers’ key question concerns the relationship between the global and localized practices—much like Conway’s concern with subaltern identities and Featherstone’s “prefigurative” ethics of solidarity; each of these readings seek to deduce a praxis, a combining of activism and the academy as was put forth in the Briggs’ article earlier this semester.

Key themes which emerge from Conway’s article are space, organization and networks as both a space and an organizing principle or method. Over the weekend I drove to Boone, NC and back for a dear friend’s memorial service. My GPS took me through Rural Retreat’s winding back roads where the sun shone through the sides of worn barns and farmers waved from their tractors. The road, built to accommodate the landscape, literally flowed down the mountain. Similarly, the banjo tunes rolling out of my speakers flowed, note after not in a seemingly autonomous fashion, independent of staunch form found in chamber music or symphonies. Looking strictly at the road, it was not created in a chaotic fashion—there is a reason for the sharpness of the curves, the height of the bridge, the two minute detour around the valley. As for the music, the drop-thumb style of the banjo requires a certain cadence, the wood of the particular instrument beacons a specific tone. In short, flow is not random. As the poet Charles Olson states, the geography “leans in” on us. Here the geography can encompass the political, cultural, linguistic, economic, or social factors… but something is leaning. This is also true in Cumbers discussion of swarming, which is used to describe the decentered movements of the multitude. Where are the topologies of social power (189) leaning? How are they altering the course, guiding the swarm? Does this change our understanding of autonomy? Cumbers seems to allude to the need of addressing this with her statement that structurelessness often becomes a way of masking power. In horizontalist movements, this is seen in the implication that all involved are equals in decision making (188). While terms such as “swarm” and “flow” are interesting, I am cautious to use them, as they all too easily mask the underlying powers.

Spatial organization is a key point in each of the readings: organizational and knowledge tends to occur in places, or with special regards to place based initiatives. Within networks, open space is incredibly important for the hope of equal involvement and the emergence of subaltern identities. This often requires “place based events,” once again intricately connecting the global with the local—the goal of networks (as convergence spaces). Cumbers understands network as a theoretically over-idealized construct, however, we see the implications (if flawed) of networks in Conway’s analysis of the WSF. This returns us once again to a question presented in class a few weeks ago: how do we measure effectiveness?

I end with a question about relevancy. Is Cumbers piece dated? Are we still heralding the possibilities of the internet as a network(ing) space? She notes that passivity isn’t an option in this realm—with the emergence of clicktivism, has apathy entered the most active of spaces?

As Jennibee88 points out, Featherstone “uses the concept of a “prefigurative ethics of solidarity” to describe “a commitment that organizing practices should bring into being the alternative worlds they seek to create” (p. 186).” Are we, ethically, to critique “bringing into being”? In what ways or what examples do we have for a creation (or, bringing into being) story that relinquishes power in a way to establish equal if not equitable relationships?

These readings discuss peripheries and cores and rotation… what do we mean by that? Can we define the “core”? So much is happening at the margins—to the extent that the edge becomes a romanticized space—for both Conway and Cumbers. Why? This is obviously problematic, but why has the center or core been negated as a space for change and possibilities? Is this a continuation of western frontier-ism?

I am struck by two terms: flow and swarm. They have their accepted definitions within the readings, but beyond, outside the domain of this conversations, birds and insects swarm with reason and intent. Water flows due to gravitational, some may say sovereign, undisputed organization. It is not chaos or kismet, there is an order. What is the order within the horizontal swarm behavior Conway and Cumbers describe? What is the direction of the flow of the movements, and most importantly, what is the impact of (cultural, social, geographic, structural) landscapes on movements themselves?

It was rewarding to see Cumbers address ability, even if briefly (186). I am curious, are there thoughts on abilities privileged within specific networks? How can this be disrupted? How do we recognize oppression of those with dis/abilities within autonomous spaces? Can spaces be autonomous if they are not accessible? 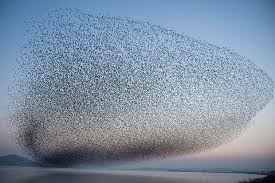