“Justice is what love looks like in public.” –Cornel West

I found these readings (chapters 1,3,8,& 9 from Meg Luxton’s “Social Reproduction,” two articles by Annelise Orleck and a 1913 manifesto) to be about resistance, domesticity, labor, work, and value. However, they left me thinking of (if not seeking) justice. These readings are about injustices done for the sake of… social reproduction? The status quo? The sustaining of space between “us” and “them?” I am not totally sure. The idea of welfare queens and speaking up/out, and the power of raising and perhaps for the first time hearing one’s voice, allow a glimpse of what it is like to resist the powers-that-be in the neoliberal era. These articles and chapters come together to guide readers through the themes of dismantling the welfare state and feminist resistance; at first glance, I assumed feminist resistance would be the agent to dismantle the welfare state, or rise above the need for assistance. I realized after reading that it is in fact neoliberal policy(s) which dismantle the progress of welfare (programs) and interrupt the promise of grassroots organizations, all while creating and maintaining the forces which feminist movements must try to resist.

I begin by saying I was struck by the form of Annelise Orleck’s work. We often question “the master’s tools”[1] in class, rarely applying that to our own form and methodology as (hopeful) scholars. Combining knowledge’s and voices was encouraged in Laura Briggs’ article “Activisms and Epistemologies: Problems for Transnationalism’s,” and in Orlecks interview with Duncan we see this manifest as a space is made through the form of the text—the reader becomes a third party, privy to language and “hearing” Duncan’s voice. Additionally, Briggs’ understanding of the misguided actions of scholars who “give activists or oppressed people too much credit for always having a good analysis of their situation and always resisting it . . . on the one hand, and too little credit for their [activists] intellectual work, on the other hand”[2] is sadly seen here in the dismantling and demanding of a specific type of education by the state (in the Reagan/Bush regime). Briggs argues that this results in a romanticism of activists and an intellectual elitism claimed (perhaps even unaware) by scholars. In today’s readings Orleck works between these assumptions utilizing ethnographic methods, offering a timely example.

Secondly, it was interesting to see how these readings picked up where my concern regarding our open-ended discussion about the all-inclusive yet non-defined precariat had left me; cautious of movements which focus on the relationship between people and their rung on the ladder, rather than people and their relationships between one another. (Metaphorically) if we ignore the ways in which we march towards change and why we maneuver differently, we simply see the distance between ourselves and the finish line—not the spaces between people, the ways in which we touch, endanger and protect one another. These readings began to address that consciousness both theoretically and empirically. As we concluded the Precariat readings I was concerned voices would be lost without the ability to “join” the mega-class. This reading was assured in Luxton’s declaration that feminist movements often “ignore or deny the salience of class and the feminist possibilities of reproduction,”[3] bringing me to what I found as central themes throughout the readings: (understanding) social reproduction, the relationship between (gendered) labor and work, and the role of the female citizen in neoliberal states.

Dedef Arat-Koc calls upon the biting work of Cindi Katz to begin her chapter “Whose Social Reproduction? Transnational Motherhood and Challenges to Feminist Political Economy.” By doing do, the chapter begins with a naming of “vagabond capitalism.” This phrase turns the system into a mobile, lurking, drifting, unsettled entity. Bob Dylan’s “Rolling Stone” plays in my mind when I hear the term “vagabond” and yet, it offers capitalism power when paired together—it does not become a blurred concept, but a flexible system with options and the ability to slip out of one’s grip. This term perplexes me. There is also a puzzle here: is “vagabond” describing the process, product, producer or concept of capitalism? Regardless, such capitalism is a large part of (western) social, economic and political construction, and thus a part of social reproduction, or “the range of activities that ensure the daily, generational, social, emotional, moral, and physical reproduction of people.”[4]

This phrase is still unclear. If the “greatest achievement of feminist political economy has been to talk about social reproduction to make visible and to problematize what would otherwise be invisible or seemingly trivial to the economy, to society, and even to (liberal) feminist theory.”[5] What is social reproduction and how does it differ from social production? Assuming the replication of vagabond capitalism, the process is mobile and divisive. The case studies shed light on the ways in which oppression is reproduced in this system. I was struck by the comment that oppression doesn’t equal exploitation. Further, the notion on page 18 that liberation can never be fully realized shed light on the power of reproduction, replication, the over-and-over process of producing and consuming.

There is hope in these articles. David Featherstone defines solidarity as “a relation forged through political struggle which seeks to challenge forms of oppression.”[6] Featherstone sets forth a “path” for practices of solidarity which includes 1) transformative relations, 2) a need of being “forged from below or through pressure from without, and 3) a refusal to stay within the nation-state.[7] Thinking of previous readings about solidarity and the aforementioned problems of a relationship to production over relationship to one another, the question arises: is the work of Duncan and to an extent the work of the Canadian women an example of social production through solidarity?

As I am teaching about the industrial revolution, I am preparing to discuss unions and work in the United States’ “capital periphery,” Appalachia. I do so by reading the following passage:

. . . [t]hat labor has historically reflected the class and economic diversity of the region…[8]

The problem with focusing the study of labor relations exclusively on unionization and contractual procedures is that labor unions have historically only been able to claim a small percentage of American workers . . . labor and the perception of labor history underwent dramatic change by the late 1960s. Within this broadened conceptual framework, labor scholars explored more fully how workers built and lived within their own communities.[9]

With the exception of articles on slave and convict labor, only limited attention is given to unpaid labor. . . Work entails more than the physical activities of producing and distributing goods or services; it also involves the social relations that result from production, distribution and service activities. Thus, labor issues reach beyond mine, mill and hospital ward into the homes and neighborhoods of workers, influencing their values, belies, traditional and identities.[10]

Domestic work was featured in the articles. Work seemingly belonging to women is at stake—in order to compete women must work harder, labor harder to get “ahead.” However, how different are the terms labor and work? Are they space specific? If, to Appalachian scholars, labor issues reach beyond the mine, does work? And if so, why is it not compensated (as the 1913 article points out)? 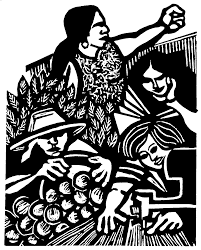 Woman as Citizen as Neoliberal Denizen: Citizenship—who becomes a worthy or eligible (?) citizen in the neoliberal system?

What does this mean for women? What can we learn from these case studies and analyses? The answers are grim, but the possibilities hopeful if one is willing to imagine the impossible as possible, the radical as the obtainable. For women, neoliberalism has meant “to work more.” With rights taken away, I believe the case can be made that women left without support become what Guy Standing would refer to as a denizen created and maintained by the neoliberal state. Through this reading it became clear that neoliberalism isn’t a passive ideal that people adopt, rather it actively silences, quiets, and ends movements.

I end this readings thinking about justice and reaction and resistance. How are they related? How do they conflict and conflate one another?

[1] In relation to the question posed by Audrey Lorde; “Can the master’s tools dismantle the master’s house?”