If you go to any grocery store today you will see an entire aisle devoted to bread. Sliced bread, baked bread, bagels, donuts, whole grain, white, sandwich, French, Italian, sourdough, the list goes on and on. For nearly as long as there has been recorded civilization, there has been bread. And though the how or why was not known for thousands of years, the central agent in bread making is yeast.

Before bread, there was simply grain. Grain had to be harvested from wild grasses, but to do so required a revolutionary step forward in the co-evolution of grass and man. Instead of letting the wind rip grains from grasses (and thereby plant new seeds for further growth), man had to alter the natural process. Grains that flew through the air helped no one; they were wasted as a potential food source. Instead, grasses that showed tendencies to produce grain that stuck to the stalk were selected for, and in time these wild grasses evolved into cultivated grains such as wheat or rye.[1]

Thousands of years passed, and what were once wild types of grain transformed into wheat, barley, rye, millet, and rice (though the evolutionary history of rice is somewhat different). These grains competed for top dog status amongst early man, until the invention of bread in ancient Egypt catapulted wheat to the forefront, where it has remained ever since.

Early man did not simply eat grains right off the stalk, instead they often mashed it together with water and other grains, making various porridges and pastes. Some civilizations heated those pastes, making a type of hard cake. Yet somewhere between 4,000 and 6,000 years ago (with some estimates as early as 10,000 years ago), the people of the Nile came across a startling discovery: if they let their primitive dough sit outside for a time and then cooked it, something transformative happened.[2] Instead of compacting and forming a solid hard substance (with very little taste or nutrients), their dough would rise, and create a taste and texture never before seen in the world. The magic of bread making transformed Egyptian society, leading to social classes and tax structures based entirely on baking and bread.[3]

What the Egyptians stumbled across is actually a fairly simple process, chemically speaking. Though the exact mechanisms and causal agents would take thousands of years to discover, the secret behind baking lay within the power of fungus, specifically yeast. These single celled organisms transformed human society, and they did so through an ancient biochemical pathway: glycolysis. When the Egyptians left their dough outside, spores of yeast would land on the grain paste and quickly begin to feed on the sugars that it contained. Using those sugars as nutrients, the yeast would produce two primary chemicals, ethanol and carbon dioxide. The ethanol would leach into the dough (providing flavor), and the carbon dioxide would bubble in its gaseous form, creating holes and pores throughout the bread.[4] Upon being placed in a heated furnace, the ethanol would burn away (eliminating a possible method of getting drunk off bread), but the carbon dioxide would remain trapped, and would raise the bread dough, transforming it from a hard paste to a fluffy, airy foodstuff.[5]

The secret of bread spread from the Egyptians to the Israelites, and then on to Greece, Rome, and eventually (almost) every culture on the planet.[6] The technology of baking served as vessel to transport yeasts and as such became a major tool of the yeast domestication process. Without an impetus for using yeast in baking (or in fermenting alcohol, see separate section), human beings would not have developed the symbiotic relationship we employ with yeast. In short, yeast gave rise to one of the most important stables in human nutrition, and in exchange we spread yeasts across the globe and helped propagate the species to the point of assured continual existence worldwide. 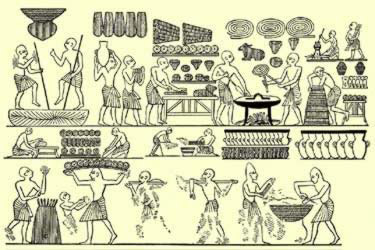 Bread as a political tool

Bread in ancient Rome was an important part of daily life. The bakers who made bread formed their own guild (the Collegium Pistorium) and were the only craftsman who were also freemen instead of slaves. Bakers were held in such high esteem that they even had a seat on the Roman Senate. The quote that headlined this post was taken from Satire X by the Roman poet Juvenal (c. AD 100). Juvenal was a satirist who criticized what he believe to be corruption in the system of electing Roman officials. Rather than vote according to their duties and beliefs, Juvenal believed the general population was essentially being bought by wily politicians. Instead of requiring that their representatives and officials be virtuous or heroic men, the “mob” preferred to be appeased through grain or bread handouts and entertainment in the form of gladiatorial games or chariot races. Today the phrase means apathy of a voting bloc or a method of appeasing a populace through superficial means by a oppressive regime.

[2] Dugan, Frank M. Fungi in the Ancient World: How Mushrooms, Mildews, Molds, and Yeast Shaped the Early Civilizations of Europe, the Mediterranean, and the Near East. St, Paul, Minn.: APS, 2008.