Welcome to the “Party”: Marxism and Leninism in Late-Imperial Russia 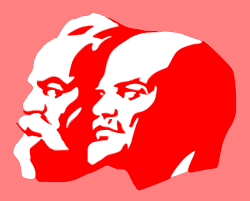 Following the publication of, “The Communist Manifesto” by Karl Marx and Friedrich Engels in 1848, the Marxist ideology took root nearly every European state to some extent.  One of the consequences of this dispersion and diffusion of Marxism into European political thought was that the theory differed from region to region and from state to state.  Russia in this case was no different, and in fact, and Gregory Freeze puts it, “[a]mong European Marxists, nowhere was the issue of the succession of revolutionary ‘phases’ more hotly debated than in Russia” (Freeze 246).

The argument among Russian socialists at the time was over the proper succession of economic systems according to the Marxist ideology.  Some Russian socialists believed that Russia was not ready to emerge as a socialist state.  These revolutionaries believed that a capitalist system, industrialization, and a growing middle-class were necessary (albeit unwanted) steps towards class struggle and the emergence of a socialist economic system predicted by Marx.  As Freeze states, “[c]apitalism was evil, of course, but a necessary evil, which carried the seeds of a socialist future in its womb” (Freeze 247).  Though their side of the argument was closer to that of Marx’s ideas, these “legal Marxists” or “Mensheviks” did not appeal to the masses and always remained a minority in the revolutionary movement.

The Marxist movement that appealed most to the Russian masses, the land-hungry peasantry and the disenfranchised industrial workforce, was that of the Bolsheviks.  These socialists were much more radical than the orthodox Mensheviks.  They rejected the need for a capitalist phase in Russia’s economic development and argued for a n economic transition straight into socialism.  As mentioned by Freeze, “the Bolsheviks shared the populists’ thoroughgoing impatience with intermediary, liberal-type solutions” (Freeze 247)

The best-known of the Bolsheviks was Vladimir Ilyich Ulyanov, better known as Vladimir Lenin.  Lenin and his Marxist peers embraced the use of radical tactics such as terrorism, workers strikes, and secret political organizations.  It was In Lenin’s 1902 work, “What is to be Done?”, that Lenin speaks at length as to how such organizations would be structured according to him, and how his structure would differ from the secret labor unions that already existed throughout Russia.  As he describes,

“The political struggle of Social-Democracy is far more extensive and complex than the economic struggle of the workers against the employers and the government. Similarly (indeed for that reason), the organisation of the revolutionary Social-Democratic Party must inevitably be of a kind different from the organisation of the workers designed for this struggle.”

One of the differences that Lenin speaks of is the need for the social-democratic political organization to have a tight-knit group of members, all of which are devoted to the socialist cause.  As he states, “the organisation of the revolutionaries must consist first and foremost of people who make revolutionary activity their profession”.  Secondly, the political organization should not be separated by class or by trade in the way that trade unions are.  The socialist organization should should be effectively “classless”.  His third major point as to the party’s organization is that it must be as conspiratorial as possible.  In sum, Lenin states,

“If we begin with the solid foundation of a strong organisation of revolutionaries, we can ensure the stability of the movement as a whole and carry out the aims both of Social-Democracy and of trade unions proper. If, however, we begin with a broad workers’ organisation, which is supposedly most “accessible” to the masses (but which is actually most accessible to the gendarmes and makes revolutionaries most accessible to the police), we shall achieve neither the one aim nor the other”

Throughout his rhetoric of political organization and action, Lenin laid the groundwork for revolutionaries throughout Russia.  His message of secrecy and resistance to the state resonated through the country and bolstered the ranks of the radical Bolshevik party, which would soon come to overthrow the Romanov autocracy and usher in the beginning of the Soviet period.

Lenin, Vladimir. The Primitiveness of the Economists and the Organization of the Revolutionaries. n.d. https://www.marxists.org/archive/lenin/works/1901/witbd/iv.htm (accessed September 7, 2014).

—. The Spontaneity of the Masses and the Consciousness of the Social-Democrats. n.d. https://www.marxists.org/archive/lenin/works/1901/witbd/ii.htm (accessed September 7, 2014).

‹ The Half-Measured Emancipation › Changing of the Guard: World War 1 and the Soviet Revolutions