The main range weapon used by the English was the English Longbow, and even though it was first developed in the 11th century, the term “longbow” was not coined until the15th century. Of Welsh origins, the longbow was first extensively used in 1138 at the Battle of the Standard, which was fought between the English and the Scottish. Through the centuries, the longbow saw further incorporation into English military doctrine, first starting with mandatory weekly training among the archer corps, and later mandated by law that every male child of a particular class, starting at age seven, would train with the longbow. This indoctrination led to England having an extremely proficient archer corps, and would help them immensely in battles throughout their history. 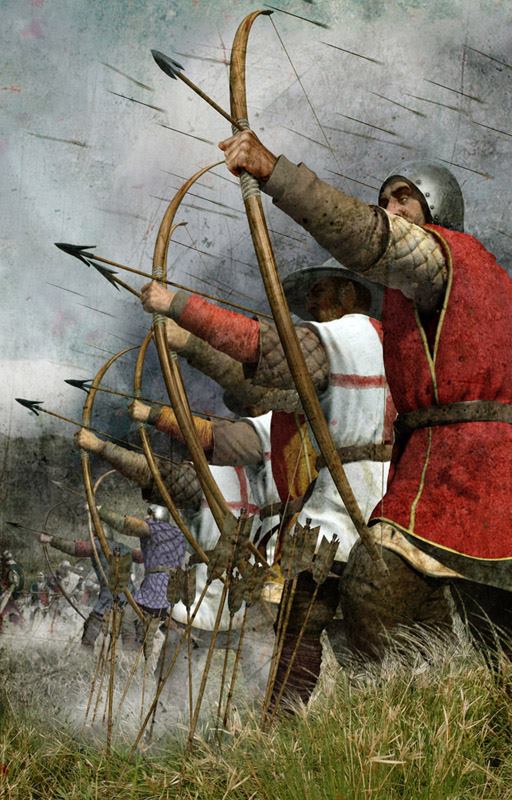 Longbows were made using the heartwood of yew, meaning the center of the branch, with the arrows being made with aspen or ash. Common draw weight for the longbow ranged from sixty to one hundred pounds, meaning it took up to one hundred pounds of force to pull back the bowstring. This draw weight then had to be maintained while the archer aimed, which required a great deal of strength. Modern compound bows, through the use of pulleys, essentially lock in place once the string is pulled back, making it much easier to shoot. Arrows shot by longbows were mass produced, and for good reason since a well trained archer could shoot six arrows per minute. The feathers used with the arrows were goose feathers, which caused a drastic drop in the goose population in England, since so many arrows were stockpiled. Younger archers wore leather gloves, but more experienced men relied on the heavy callouses that formed to protect them from the friction created by the bowstring. Archers were lightly armored, since they typically engaged the enemy from a distance and needed to maintain flexibility to properly use their weapon. Archers would surround themselves with sharpened wooden stakes to make it more difficult for enemy cavalry to approach them. The broadheads on the arrows used could pierce through chain mail and even some plate armor, which made the long bow an extremely effective weapon. An experienced archer could accurately hit a target at 180 yards, however volley fire tactics were used up to 250 yards. Longbows were immensely effective and extensively used during the middle ages, and became a focal point of English warfare strategy.

Comment on The Rise of Coal Technology – Harris by Suraj Narule